By zsstevens Friday, August 07, 2020
Today marks a significant step back out into the community. I shall be visiting Cairnbulg harbour to see the debris brought ashore from our seas. Some of my political colleagues in the community are getting seriously engaged in this issue and want me to see what's happening on their beaches. 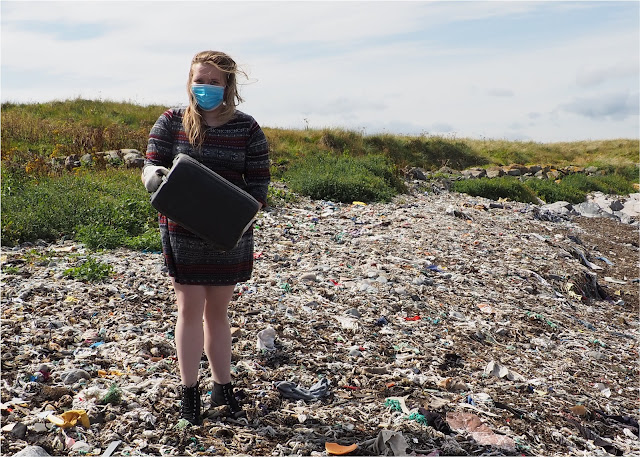 It's a good first outside engagement since March. Firstly because it is outside, it will be easy to maintain a two-metre distance, and there's no reason why I cannot wear a mask. And secondly because as we are a significantly coastal area, it is an issue that matters to us.

One of the organisations that are engaged in the sea litter issue is KIMO. They describe themselves as a "network of local governments, working together for healthy seas, cleaner beaches, and thriving coastal communities."

It was originally founded thirty years ago in Denmark. That's a country I feel a substantial affinity with, not least because my nephew works as a teacher there and has bi-lingual, Danish & English, offspring. In fact, I have a bit of their paper currency in my wallet right now waiting for the opportunity to offload it onto my young great-niece and nephew.

Both Aberdeenshire and Aberdeen City are members, and I have attended a fair few of their local events over the years. But it's not just our Councils that are engaged.

Our fishermen are on the frontline. Both because they are directly affected by litter and through their efforts to land rubbish from the sea. Each year they bring an amazing assortment of junk which they have caught in their nets ashore. Anything from plastic bottles to complete fridges.

The charity Keep Scotland Beautiful has been around for twenty years and has a My Beach, Your Beach initiative that helps businesses make their contribution to cleaner beaches. They identify that 12 million tons of Scottish rubbish goes into our seas each year.

Some of the actions can be quite simple. If you have a shoreside business, it might be as straightforward as making sure your litter is stored securely. If not, even quite a modest breeze might take some of it offshore. And marauding seagulls might rip rubbish bags apart and dump their contents on our beaches.

KIMO produced a report in 2004 which showed that the cost to our fishermen could be as much as £30,000 per boat through net repairs, contamination of catches, fouled propellers and fishing time lost because they have to spend time clearing their nets of debris.

Does the MSP turning up to one beach in the area magically transform the situation? Clearly not. But given that 80% of the sea's litter comes from our onshore activities, anything that highlights the problem is going to be good.

My diary remains as full of online video meetings as ever. Indeed the number seems to be increasing. And with Parliament moving back to our previous pattern of three days of the week being in Edinburgh, I foresee probably the busiest autumn since my being elected nineteen years ago.

And with much recent time pinned down by COVID-19 activity, and properly so, there's a fair bit of catching up to do in the constituency and in our Parliament.

We expect the rules to allow my local office to open again in September. Although I suspect that will make less difference than you might imagine.

Over recent years the amount of casework that arrives for me in letter form has plunged downwards. At the same time, email and phone have leapt in to replace them. With our having a shared computer database for that part of our work, we can do the needful wherever we are. And it has always been the case that in the large area which we cover, we go where we are needed rather than waiting for constituents to walk in our front door. They just don't.

I guess for city MSPs; the street shop-front will still be important. We moved some years ago from the centre of Peterhead where we had a mildly adapted house as the office, to a purpose-built "small office" complex next to a bus stop on the outskirts. Much better.

It raises questions for us, but what about others? There is still a weekly visit to collect the local papers from a nearby shop. With my staff working from home, the lunchtime sandwich is no longer being purchased. In itself, no big deal for the nearby garage to lose my occasional order for one of their fine BLTs. But there are about twenty small offices in our complex. Almost all have been quiet for months. Few cuts multiply by the many can have non-trivial effects.

If we have found it possible to work from home for the many months that we have been, why go back to the office? The commuting is cut, and the climate is saved. With fewer miles on the clock for our cars, their replacement is postponed.

There are still a few adjustments required that are beyond our direct control. We still do have mail sent to the office. That's where Royal Mail's redirection service comes in. You send it to the office, but it gets passed on to our lead office person at home. But one cannot, currently do that for more than twelve months. That probably needs to change.

Some big businesses get their outgoing mail collected from their premises. In my previous occupation before elected politics, two 42 ton trucks used to arrive at the Bank of Scotland's computer centre to collect the up to 4 million letters we might send out each day. When I moved on in the Bank from being responsible for the operational side of our activity, I had got our daily print run down to about 70 kilometres of paper a day.

But for small businesses in a rural location, it's the local postbox or nothing. Fine, but at our local box in Cornhill, for example, the daily collection is 1215. That means anything ready for despatch in the afternoon is delayed for a day unless one makes a 16 mile round trip to Banff. Is it time for a new affordable collection service for smaller businesses?

The big things that are changing, or need to be changed, are clearly visible. But the smaller changes need thinking about too.

Because even if we don't know everything about our lives post-pandemic, we can be sure that it won't be exactly as before.

But the Cairnbulg beaches of this world were a problem last year.

Unless we take action now, they will be a problem next year. And the year after, and the one after that, ad infinitum.