By zsstevens Sunday, August 09, 2020
It's so warm out there that it's almost a relief to be able to sit indoors behind the thick insulating stone walls of our house. I am on a sofa at the end of our sitting room furthermost from the TV. That is not, however, giving me all the peace that will assist in detaching keystrokes from my fingers into the computer on my lap. 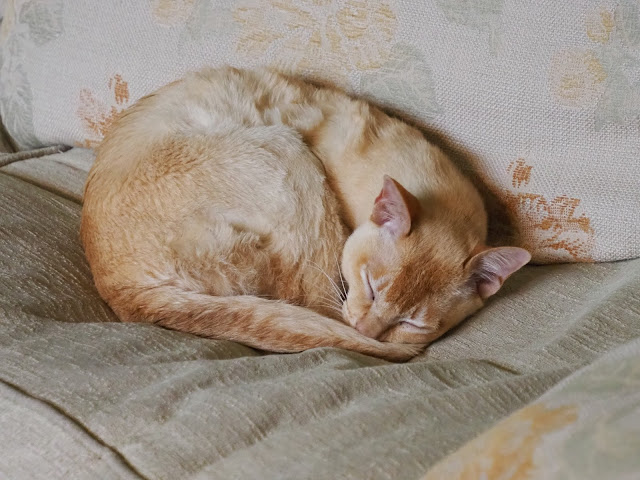 Donald Ruirh, our elderly gentleman cat, is abjuring his morning snooze in favour of "throw and fetch". He has a wee toy made by our neighbour which is simply a knot tied in a small piece of material. But at the heart of it is some catnip. One sniff of that and cats rise from the most profound slumber to draw its intoxicating fumes into their lungs

The pupils of his eyes are wide as he hops up beside me with this between his teeth and a continuous purr is amplified by his partially open mouth. Should I ignore his presence, and the newly deposited toy, a paw will engage my arm. On the second occasion, it will be augmented by the full armoury of claws he has at his disposal. It is compulsory that one picks it up and throws it as far down the room as one can.

Given that his pursuit of the flying toy almost means that he's there to catch it as it lands, he returns to repeat the plea, before I have typed a single sentence. He can keep this up, even relatively frail as he now is, for far longer than I have the stamina for. He never tires first.

Fortunately, he has concluded that the other "hooman" in the house is more attentive to his needs and is now directing his requests to herself. I can, therefore, return to my contemplation as to why I am finding some bits of my existence quite difficult.

Given that this is the 144th daily edition of my social isolation diary, one might take that as my having arrived in a fully adapted form to home-working. Not so.

My political colleagues have a private WhatsApp group on our phones which the whips set up a couple of years ago. It was simply a quick private way of sending us, individually or collectively, urgent and important messages.

I hope that's not my blowing the gaff on our use of this tool. But I am confident that it's in the public domain already. For it as well to remember Sir Humphrey Appleby, the Minister's Secretary in the TV comedy "Yes Minister", when he quoted Francis Bacon (maybe him, maybe not) as saying; "He who would a secret keep, must first keep secret that he hath a secret to keep".

In 1985 or '86, my spouse and I were having lunch with a mutual friend. The subject of the takeover of Bell's Whisky by Guinness arose. All three of us worked in finance. My spouse and the friend for an Edinburgh stockbroker, and I for Bank of Scotland. It appeared that my wife had done the number-crunching that underpinned what Guinness decided to offer for that famous Perth-based company. I then chipped in that one of my teams had been responsible for the computer systems which managed Bell's shareholder records.

Takeovers, when contested as this one was, tend to be iterative processes with both the putative buyer and the defender shifting their positions as the battle progressed.

My spouse and I then thought back some six months to that period. And realised that we both been quite busy. But neither of us had known until that lunch that we were on opposite sides of this takeover bid.

Part of developing to become an adult is learning to keep one's trap shut. To deny oneself the vicarious pleasure of revealing to someone else that one possessed a secret. In politics, even more than in business, victory comes from denying your opponent insight into your strategy and plans.

The WhatsApp group I am a member of, I hesitate to say participate in as I barely do, is a bit of a mystery to me. During yesterday's walk, I finally think I have cracked why this is so.

To me, it is just noise. Everyone speaking at once, in increasingly loud "voices" that submerge any meaningful substance to what's going on. Making it difficult to identify the interleaved threads of the multiple discussions. Impossible to separate questions from answers. Challenging to connect what might be answers to questions addressed by person A towards person B but seeming to be responded to by Person C, or more to the point, person Z.

I then looked more carefully at the participation. Substantially less than half of our group are "talking". Maybe like me, they are "listening", perhaps occasionally nodding invisibly to themselves, but essentially outside the debate.

Then I twigged. Without body language, I cannot make sense of it all. I can't see if someone is humorously testing another when they "speak" or are making a serious point. I can't see anything about the mood of someone joining in the thread. I can neither see the faces, as I can on video conferencing nor hear the tone of voice used.

It is almost like watching snooker on the old black and white TVs. One could see the game, hear the click of the balls, but it made little sense because one could not see the colour of the balls. If one made an effort, one could detect changes in a grey tone which, coupled with the position of the ball on the table, helped engagement with the game. But it took close and continuous attention.

This line of thinking has opened up a wider contemplation about public social media. Someone, quite properly, responded a few weeks ago to a tweet of mine with "read the room". Get under the raw words used to understand the message.

I need to get better at this.

But I am certain that Sun Tzu was correct, by implication, about where to discuss plans. In secret.

"Let your plans be dark and impenetrable as night, and when you move, fall like a thunderbolt." ― The Art of War

Maybe I need to try harder with WhatsApp.