As we sow, we reap

By zsstevens Saturday, August 08, 2020
Not everything changes because of the pandemic. The spring barley was planted on schedule earlier this year just across the road from the entrance to the track down to our house. And this week the combine is in the field harvesting the results.

This layman's eye reckons it looks a good crop. No rain had flattened any of that field and even the damp hollow on one edge of the field showed no lack of growth.

By comparison with a farmer who tries to earn a living from milk and therefore is tied every single day of the year to the needs of their beasts, the arable farmer seems to have an easy life. Not necessarily.

While it is possible to lay-off some of the risks from weather, disease and variable price for one's crop, that simply means sharing the income with others who take on your risk.

The field near us was cut in two days. The stalks became neatly bound rolls of straw and the grain had been carried away. Speed is of the essence and mechanisation the key to that. The modern combine harvester is a far cry from humans using scythes or hewkes and from the reaper that followed that. My father, born in 1904, looked forward to the discarded blades from the reaper becoming available to be used as the slides on his winter sledge. With a horse towing this equipment it had to be fairly light and had limited durability. 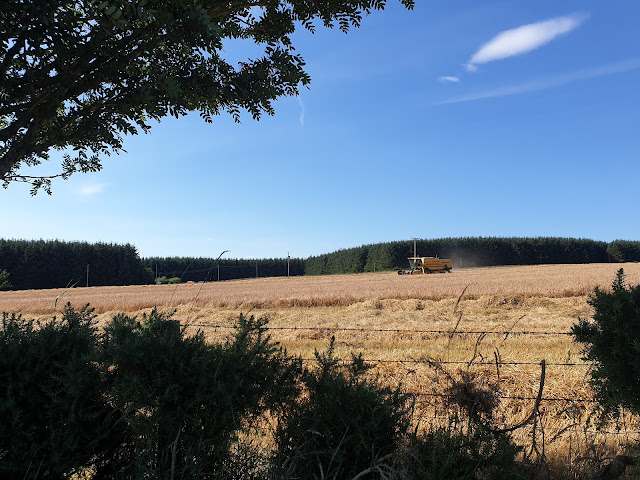 The machine cutting our local barley was far from new. It had a "P" registration plate. I remember having a second-hand Triumph Dolomite Sprint with MUC802P on its number plate in the mid-1970s. That's the type of car that now has aficionados drooling over surviving examples of a vehicular classic at an auction. My car was in a then-popular colour - lime-flower yellow. The combine was similarly coloured. After many years in our weather, the paint had lost its original sheen. The exact yellow is uncertain.

More to the point, I saw a couple of occasions when it was stopped half-way down a cutting track with one of the operators trying to clear a jam from the cutting blades. With age comes decrepitude. Machines in the fields and me. Tell me about it!

At least for a human, there is an inexpensive way to offset at least some of the effects brought by my increasing years - regular walks.

At the beginning of the week, a near twelve-mile hike. Today? I expect five or six. The strange thing is how quiet it has become on our local roads. My last walk lasted about two hours. I only saw one vehicle and no opportunities for conversation arose. I was left to my own contemplation.

The hedgerows still carry the last of the wild raspberries but the brambles are many many weeks from being ready for picking. Sucking the occasional clover flower freshens the mouth during my walk but leaves the metabolic system unchanged. There is little carbohydrate energy in the very modest amount of sugar in them.

Domestically, country barter is in full swing. A huge crop of courgettes next door means some arrive at our door. Very welcome!

Our blackcurrants are ripening almost faster than I can pick them. Some of those make the reverse journey to our neighbour.

Gooseberries are assuming that beautiful red ripe colour and the trees promise a good yield of apples. Less certain about the plums. For some reason, our new rhubarb plants are growing very slowly, and the herb garden is just sitting and sulking.

But all of that domestic and wild bounty requires little effort.

The farmer might appear to have periods of idleness between sowing and then harvesting their crop. But if your combine is over forty years old, a fair bit of time is spent with spanner in hand refettling it. And then there is keeping grain dryers up to scratch. Preparing the equipment for the next sowing. The never-ending cycle of agricultural life where nature's seasons are the boss and the farmer their slave.

For those of us who are office-slaves, who have previously seen a predictable diary indicating where our efforts will be directed in the days and months ahead, the pandemic still turns us away from predictability. Albeit some is returning.

Parliamentarians like what I am, are now looking to a return to normal from September. Back to three-day sittings and a regular pattern of Committee Meetings. Social distancing in Holyrood, as everywhere, will mean it isn't exactly the same. Some MSPs will have to occupy seats in what has been the public gallery.

Our six Committee rooms are being adapted to keep space between each of us. That's a shame. The glimpse of a note on the desk before a political opponent who sits beside one will no longer be possible. But whispered exchanges were always more important and will now be more difficult.

This coming week I am slipped from attending Parliament but will be participating by video. We have an Environment Committee meeting on Tuesday. I am speaking in a debate on Wednesday and have an oral question on Thursday. That's the visible stuff that will be on the record.

Each day also has further video meetings. And there will be plenty within the intray and electronic inbox to fill in any gaps. For the moment at least, there is zero social time, apart from walking exercise that is. But that's often a useful time for mulling over options for dealing with some of the trickier issues before me.

Friday sees my planning to engage with the Scottish Association for Mental Health and some service users in the North East.

With the significant pressures on their mental health that will be affecting many of our citizens during the pandemic, isolation, anxiety, loss of physical fitness, it's very timely. And an area of public endeavour and private concern in which I have a personal interest as I worked in a psychiatric hospital for a period in 1964. My father-in-law and a sister-in-law were both nurses in this part of medicine.

Almost all of our community understands the issues thrown up by and the behaviour changes required by the SARS-CoV-2 virus.

The indefensible behaviours of pub-crawlers that appears to be the reason why new measures are having to be imposed in Aberdeen, we must hope will serve as a reminder of the difficulty we still face from a virus about which we are still learning.

For me, there is the minor inconvenience of a train in nine days time which must go via Inverness rather than Aberdeen. Three hours out of my life.

But a change in behaviour improving my chances of life itself.

On to a new normal.

But there still can be no timetable for arriving there.