Discussions at a Distance

By zsstevens Thursday, April 23, 2020
The pace of change seems to be stepping up. This week will see me participate in eleven online video discussions, only one of which is social. Two are international discussions centred around COVID-19 and its potential long-term effects. The remainder are Parliamentary.

But I think we have further transitions in our mode of working to make. We shall have legislation to progress. And I am deeply concerned that this key part of our duties excludes those of us unable to be present physically.

With social distancing rules also restricting the number who can be present in the Chamber, the scrutiny is potentially reduced while we are accelerating the pace at which we make new, albeit mostly temporary, new laws. The risk of error is rising, although I cannot see any yet. Others may.

Two difficulties exist that need our attention. We don't seem to be able to run sessions where some members are physically present while others are "dialled in" from home. And yet even Westminster, hardly previously thought of as the home of innovation in Parliamentary processes, has managed to achieve this.

Secondly, the lack of space in Committee Rooms means that social distancing of members cannot be achieved there. So we can use the Chamber for Committee meetings. But why do we need to be physically present at all?

There seems to be an assumption that legislating needs physical presence. Why? Is it because we need to be present to vote? In Committees, where much of the hard graft of amending law takes place, we vote by show of hands. When we are dialled-in on video that's easy, or we can use the chat-box available in the software we use, to type our preference. Thus there is audit-trail, and all members of the Committee can see how everyone is voting. Just like being a couple of feet away in a Committee Room.

I am going to stop short of saying that we are in danger of heading towards arrangements that undermine democracy, but others might. And we should make further efforts to avoid aiding them to do so.

Elsewhere, it has been a good week for me. I am now richer. I spotted a pound lying on the road during Monday's 7.35-mile walk. But I think there is a wee wake call there for me about posture. If I am walking along looking at the road rather than the horizon, am I in too much of a stoop? Sort it or suffer back problems Stevenson!

Finding someone else's money, because that pound was not mine, does not actually make me richer. We might remember the schoolyard chant, "finders keepers, losers weepers", but in reality, it is neither the legal position that I gain ownership nor a moral stance for me to keep the pound. Our next visit to the shops is planned for Monday, ten days since our last one, and if there's a charity box, that's where it will go.

Elsewhere, my Danish family report that junior schools have re-opened. My nephew is Head of Department at an "all grades" school about 25 km north of Copenhagen and has been planning the re-start for a while. I shall watch with interest how this plays out.

Within Scotland, the mortality rates from the COVID-19 virus in different health board areas are very different. Here in Grampian, they are among the lowest. In Glasgow, five to ten times higher. Why? Aberdeenshire has the largest share of its population living in a rural setting of any mainland council. A couple of points higher than Highland, which is more remote but less rural, with which it shares low rates.

Densely populated areas offer more opportunity for transmission of the virus. Or do they, if we are all operating to the same 2-metre social distancing rules?

As is often the case, we need to pursue numbers that will help scientists come up with answers that policy-makers can understand and respond to. In the many decades since I graduated with a modest degree in maths, it is certain that my ability will have diminished. But it has not yet been eliminated. So let's just play with some numbers.

Here are some assumptions, and they are totally mine, not science derived, not facts;
That means that in five weeks the city dweller could cause 243 other infections if the onward rate stays the same. The rural dweller would cause only 32 cases. So the numbers, even if they are just my "guesses" show that avoiding contact actually matters. But this a gross over-simplification you must not rely on.

Meanwhile, some are acquiring new skills or honing existing ones. Many of the Universities are providing short, free courses. I haven't looked yet. Perhaps on Sunday. 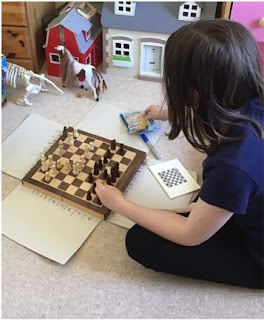 On the honing from god-daughter, Darcey is playing chess remotely. Already a master on the online zoom meeting, she is building on her skills at this game. Reports from her mum suggest that there is still some debate around interpreting the moves sufficiently accurately to ensure that both her and her competitor's boards show the same positions. I note from the photo I have been sent that there are hint sheets alongside her board. Good idea.

Playing chess remotely is not new. It used to be one of the things short-wave radio hams did with people the other side of the world. And to add further intellectual spice to their games, many were conducted by morse code.

Morse is I think now only used in aviation. If you are heading to Aberdeen Airport you would have your navigation system tuned to 114.3 megahertz. You will want to know that you've tuned in to the correct frequency, 108.2 would take you instead to Inverness for example, and to help you, the Aberdeen beacon will broadcast "ADN" in morse so that the pilot can listen and check.

In Parliament, we now send TV pictures over the same kind of copper wires that he used. We need two, Morse only needed one. His technology is part of keeping our legislature working.

I am at home but still part of it all.

Another Committee meeting this afternoon. And another few miles for my shoes.