At home but also working in Parliament

By zsstevens Thursday, May 07, 2020
Yesterday was both a good day and a disappointing day.

The sun was scorching hot, and although we had our morning tea outside, we had to sit under the parasol. Even our cats, who love basking in the sun, retired to shady spots.

The herb garden - can something much less than a metre square be a garden? - makes progress and I chewed my first bit of fennel frond as a tasty mouth freshener. I look forward to shortly stepping out to cut chives for salads, scrambled eggs and the like.

And a top day for exercise too. Just under 12 miles' walking.

At that distance, a break about half-way makes sense. The country kirk at Ordiquhill provided a step to sit on for 10 minutes in the shade for a drink of water and eating a satsuma. The kirkyard is signposted as part of the Commonwealth War Graves Commission network and also has a War Memorial within it.

One name on the Memorial is a family name for my spouse, her grannie was a Lobban, and it prompts me to add Alexander Lobban to a list of people I should check out as part of my family tree research. Her Lobbans came from Fordyce which is a neighbouring parish before moving to Newmills near Keith.

This week is the 75th anniversary of the end of the war in Europe. Parliament will properly pay respect to the fallen in that war with a minute's silence. My personal contemplation of their sacrifice too, was a silent one as I sat next to graves of some of our war dead. Jingoistic celebrations of such events are not to my taste. Silent gratitude trumps noise every time.

One of my favourite places is Barra. I have walked around the main part of that island too. Less than yesterday's walk at about 10 miles. When I did that, I experienced classic Barra weather.

It is said that each corner of the island will have a different season. And so it proved that day. Baking sun as I set off from Castlebay. A mellow autumn feel as I entered the Northbay Hotel for a pub lunch at the top of the island, it was a stroll as much as a walk, and absolutely drenched by cold, cold rain on the last two miles.

The link of Barra to Ordiquill lay in the Tangusdale graveyard. There are gravestones for Germans. (My 73-year-old memory nags me to consider whether it is another island a little further North rather than Barra?) Reminding us that others also paid the price. Hitler's fascists were responsible for many gravestones. And too many for whom there is no Memorial. 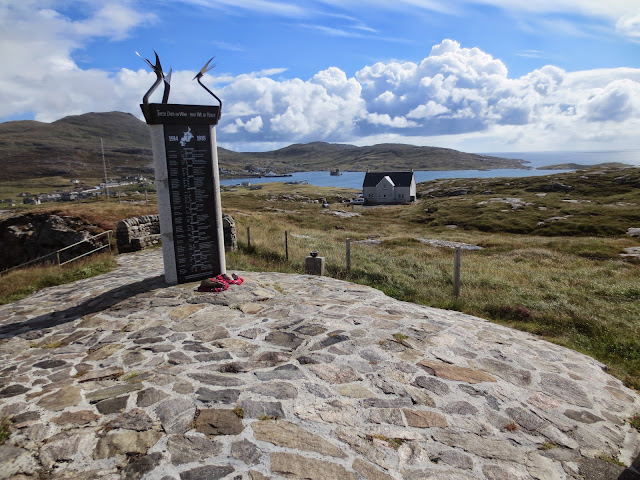 Barra's War Memorial is a modern one of a striking design. Positioned on the road from Castlebay to Bhatarsaigh, its spiky top catches the first of the morning sun and is last to disappear into the dark at sunset. The number of names on the Memorial would represent about a fifth of the island's population today.

My walk continued past the School at Ordiquhill where colleague and now Government Minister, Jenny Gilruth taught early in her career. I have visited it often and enjoyed doing so every time.

The next small community is Cornhill, about 80 houses and the village nearest to home. I was engaged almost immediately by someone who had to call 101, the normal number for the police, 999 is for life-threatening emergencies. They were reporting a group of four young men, perhaps in their twenties, who were playing football together on the Council's park. My informant had already spoken to various people in the village, and none knew these lads. They had been observed arriving in their own vehicle and dressing for football.

We all know how hard this social isolation is. But this was a deliberate breach of several rules. And a thoroughly bad example for the youngsters in the village. The lads and their car have been photographed and will be readily recognisable. At the very least, we can hope for a stern word to reach their ears.

They are probably some urban innocents who imagine that coming to the country means that you are hidden from view. Far from it. In rural communities news of misbehaviour reaches a wide audience almost before it has started. People know what I have for breakfast before I've eaten it. Or so it sometimes seems.

Don't come back. Don't do this anywhere else.

A further 2.5 miles on your weary correspondent reaches home after three and a half hours on the road. The soles of my feet are now equipped to deal with long walks on metalled roads. My lungs work well and when I measure the percentage of my blood cells that carry oxygen around my body, it is always in the normal range. Thank heavens for these apps that come with my phone.

Each day I check-in with my COVID-19 app from Kings College London, which is recommended by Scotland's NHS 24. It's simple. Just basically asks if I am well each day. Sometimes a supplementary question or two. About 3 million people have downloaded it. Its data are part of the knowledge that informs public policy. And it's independent of Government.

Beyond my finger tapping away at my phone or, as at the moment, my computer keyboard, the muscles in my lower limbs expand and strengthen. Just what I am aiming for.

A discussion last week with my former colleagues brought the suggestion that you cannot add muscle in your 70s. I could only then rebut that by my personal experience. But now a wee bit of research confirms that one can. Even acquiring a "six-pack" is apparently possible at my age. I'll pass.

Today's Parliamentary activities beckon. A pre-meeting meeting's just over. The COVID-19 Committee starts in 10 minutes. And at 1330 I shall be questioning a Cabinet Secretary on rural issues.

At home. But also working in Parliament.