By zsstevens Wednesday, April 22, 2020
Today marks the start of a very different, and much more active, online Parliament. This morning, I shall be part of an informal Rural Economy and Connectivity Committee meeting. In the afternoon, I shall be at a private "set-up" meeting of the new COVID-19 Committee which Parliament agreed to establish yesterday.

The COVID-19 Committee has among its responsibilities, oversight of the new, and rapidly developed legislation brought in in response to the coronovirus epidemic. Some of this is time-limited. There is a requirement for the Government to make various reports to Parliament on how they are using their new, and quite wide-ranging powers. I expect the new Committee will be the first port for these reports.

So despite my being required to remain in rural Banffshire, I shall be back at the heart of Parliamentary activity. Something I very much welcome.

I am not quite so sure about the views of my spouse. Her difficulty is not any disappointment at my continuing presence at home. That seems to be OK. Rather it is about technology.

I have just tested our broadband connection using OFCOM's website. It's before 0700 as I write this, a time of low usage of the internet, and the test shows 8.7 megabits per second available for data download.

We are part of the 5% of Scottish homes unable to be connected to a fibre-enabled road-side cabinet. That's partly because our telephone line does not come via such a cabinet, we are connected via an "exchange-only" line, and also because we are too far from our exchange. But the download speed is good enough for my spouse, and I to each be watching online video at the same time.

But the upload speed is only, at 0700 hours, 500 Kilobits per second. The latency is pretty daunting too. And it worsens quite a bit during the day. Normally this matters little. It did mean that when I videoed some of my activity for the BBC a few weeks ago, the five minutes of recording in high definition had to be uploaded overnight. It took about five hours in off-peak hours.

When I am participating in Parliamentary sessions, I have to be sending video in real-time from the camera in my computer here at home. The recommended speed for satisfactory picture quality is nearly ten times greater than my best speed. But my having a scummy, blurry picture with "digital artefacts" is tolerable provided the speech works. And it mostly will.

No, the real issue is that during my "broadcasts", this week about seven hours over three days, my spouse will have to be thrown off the broadband. She will not, for example, be able to watch Parliament live, which is something she regularly does. Nor will she be able to surf the net for news and comment. Or watch the STV Player to catch up on missed live broadcasts.

It is fair to say, a calm sough is being maintained in the house, through my spouse's access, at any time of her choosing, to the internet. And that is about to be disrupted.

We look forward to having fibre to our door and our being able to have such restrictions removed from our lives. And having our outgoing video to colleagues, friends, broadcasters being of the quality we, and they would wish.

A company, which the internet says has a record of technical failures, and whose accounts are in red ink according to records at Companies' House, are in the courts preventing the Government from delivering our fibre. They are legally entitled to do what they are doing. But with the court processes much delayed because of the virus, we see no end in sight while South and Central Scotland zoom to a new internet Valhalla. Grrr.

Yesterday's walk was a mere 85 minutes. That's the shortest for nine days. I have over the last five weeks of social isolation, become used to determining my own timetable. Programming my work into slots which I determined. It's a wee bit of a culture shock to have Parliament starting to take control over me again. But it is what I get paid for.

However, I now provide the desk, the computer equipment and the internet connection at my cost in my home. And deprive my spouse of her unfettered access to these domestic facilities. I see stormy weather ahead.

In the outdoor world which I see on my walk, it's hard not to come to the conclusion that it might be the time, if one can find any spare cash, to invest in B&Q or other DIY suppliers.

The sound of nails being hammered into wood as new, and I suspect long-promised, fences are being erected at several properties I pass. And some of those wielding the hammer can be heard whistling happily.

Elsewhere the gentle susurration of a paint-laden brush on wood and metal is the result of the transfer of Dulux's finest (there are other quality manufacturers, it's just I rarely hold a paint-brush) from can to destination.

And a brief exchange, at a proper 2 metre plus distance, with the operator of a power screwdriver, reveals it's a new purchase made over the internet. That connection has multiple purposes.

At a time when retail sales are down, some reports suggest a third of normal levels, perhaps DIY tools and supplies are holding up. Local observation suggests so. 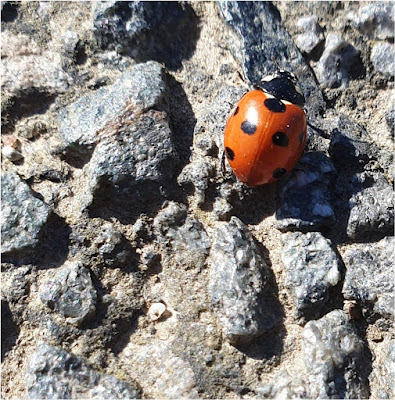 Other work is also going on; nature's work. I was able to photograph my first ladybird of the season. The many bumblebees and butterflies are far too busy to stop their work for the time it takes to get my phone out of my pocket, start the camera app, frame the picture and press the button. So no photos of them as yet.

Now it's time to print out the COVID-19 legislation so that it's to hand for this afternoon's meeting.

Maybe even shave? Or perhaps the limited quality of my transmitted picture will be low enough that nobody will notice the incipient return of my long-departed beard?

No. Standards must be maintained. The razor beckons.