Singing in the Rain

By zsstevens Monday, April 27, 2020
First proper precipitation in over 40 days. Who would have thought that the sound of drips falling off the edge of the sun parasol outside the backdoor would sound so good? But this morning's welcome wetting of the garden and the fields will, the Met Office predicts, cease in time for my walk later today.

I think I have now walked almost all the new paths at nearby Auchanderrin. And enjoyed them all. It being Sunday yesterday, there were quite a lot of people about. But in our rural setting, that never meant that I could see more than three others at any time. All of us enjoying exercise. No signs at all of any cars that people had been using.

Tomorrow we shall be on the road as we travel to fill up our fridge. Because we live in the country, and the previous normal meant my driving away from home on a Monday and leaving my car at the station, my spouse also has a car. The plan has always been to come down to one when I retire, hopefully in Spring 2021.

For the moment, they are being used so rarely that we have to remember to alternate between the cars. Otherwise, there is a danger that their batteries might go flat. Isolated, we can tolerate. Cut off, no.

There are other means of travelling, of course, besides driving or walking. And the distance to our nearest shop means an over ten-mile round trip. Not very a practical walk.

Our narrow single-lane roads are busy with the passage of cyclists. Rather looks like exercise, not travelling for a purpose other than fitness. Perfectly proper.

My own cycle cost me £5 at a country roup about ten years ago. But one of the tyres has now perished well beyond serviceability. And the bike has become part of the junk those of us with old sheds accumulate. It's buried somewhere in there. So that's not an alternative option for me.

When I was a Government Minister, I got presented with a hand-crafted tricycle. Normal bike the rear half. The front half, a wide bucket for goods or children between two wheels. Given to me by the Danish Cultural Institute at the Botanical Gardens in Edinburgh.

I was invited to mount it and cycle for the cameras. We were inside. I was happy to oblige. As I approached some of the exhibition stands, I reached for the brake levers on the handle-bars. And found there were none. Instinct made me back-pedal. To my immense relief, some clever braking system drew me to a halt about a foot short of an embarrassing accident.

Lesson learned. Never get yourself into something without also identifying how you can get out of it.

Decades ago, when I had hundreds of professional staff working for me, there was a normal turnover, sometimes over 20% per annum, in the rapidly growing information technology environment. People with the relevant skills were much in demand across business and industry.

I used to say to people, especially to those I wished to keep, always look at the job you want after your next one. Don't just go for a new job that might pay more but could shunt a career into the sidings. And I am amazed at the number who come up to me years later to say how valuable that advice had been to them.

So when I got on the Danish tricycle, I had forgotten the essence of my own rule.

Because it was a valuable gift, it was passed to the Permanent Secretary and ultimately found a great home with a charity who could make excellent use of it. 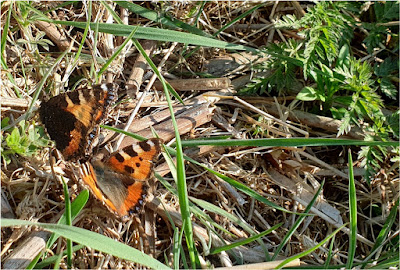 During my walks, there is plenty of evidence of further, entirely natural, means of transport. I wrote previously about my failure to photograph butterflies. Now there are so many that it is easy. The problem might instead be getting one on its own.

I am reminded how in 1982, I was in a swampy area about a kilometre outside Paraguay and was surrounded by hundreds, perhaps thousands, of yellow butterflies. On the ground, in the air; a spectacle I had not seen before, nor since. It being semi-tropical, humid and warm, there was plenty of feeding for them.

We've lots but not in that density. What we do have in great numbers is geese. And my sister tells me that they do in rural Fife as well. They are much noisier than butterflies and much more destructive of the environment they settle on.

Smaller fliers are also starting to cause their own problems. I refer to the Highland midge. It's one of 35 types of midge in Scotland. They are beginning to emerge and to display that swarming around your face behaviour that is so terrifying.

It is of little comfort to read that only five species bite. And only females. And only from the period of their second brood of offspring onwards.

Alas, they rarely hang around long enough to allow species identification and so permit the selective switching on of the hyperproduction of adrenaline that triggers our fleeing from them. I flee from them all, benign or bloodsucking.

Again, when a Minister, we visited a trout farm. We had been warned that it was a particularly bad year for midges in the area and that we should not leave the car upon arrival until protective headgear was brought us.

The moment we stopped, the front widescreen was so covered as to totally obscure the forward view. And even suitably outfitted for a visit, visibility was often down to two or three feet.

The very stuff of legends. And the source, psychological or physical - who knows? - of an itch that persisted for days.

But for my part even worse, and thankfully something I have met less often, are the cleggs, I think the English call them horseflies, which can suck up substantially greater amounts of one's blood. At least they are large enough and noisy enough to give warning of their approach.

We may not have the poisonous spiders that the Australian parts of our family have to worry about, but some of our insects make me yearn for the return of winter, higher wind speeds, midges cannot fly in winds over 5 mph, and cold.

And the delights of rain.