By zsstevens Wednesday, April 15, 2020
The exercise regime continues. Yesterday's walking came to a total of 7.84 miles. That included a new route of 6.9 miles which I walked continuously, and briskly, for a bit over two hours—feeling both virtuous and properly muscled-tired. Can feel muscles tightening in the legs.

Besides providing some new scenery, the walk also threw up a wee mystery. At five points over about half a mile, I spotted what one might almost imagine as a large washer nailed into the tarmacadam.

Now it is often said that the Scots invented the modern world. And with some due cause. But it turns out that tarmacadam was a Welsh invention not as I had always assumed, a Scots one.

Edgar Purnell Hooley patented tarmacadam in 1902 and with the founding of the Tar Macadam Syndicate Ltd in the following year, took control of the commercial exploitation of his idea. Something we are a bit less good at than we need to be. Selling our ideas? - yes; keeping control? - rarer.

It does turn out that the Scots were at this party. John Loudon McAdam was a Scots civil engineer who developed a system of road-building based on the systematic use of stone chips and stone dust to create better surfaces. But even then, he was simply improving on the methods of the great French road engineer, Pierre-Marie-Jérôme Trésaguet. Before him, nothing much had happened in road building methods since the Romans.

Napoleon famously made a contribution, less engineering than management, when he complained to his generals that his troops were having to march under the blazing sun. He suggested that poplar trees be planted to provide shade.

To this day many of "Les Routes Nationale" in France have poplar trees alongside them. An echo of Napoleon's wars and a visual reminder to the visitor that one is in France. By contrast, the "Autoroutes" are fairly stark with poplars only appearing at some of their rest stops.

So that's John McAdam's place in my historical recollections adjusted. 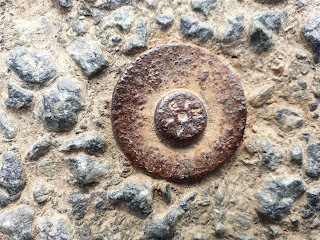 But back to the mystery of these nailed down "washers" on my country walk. I provide a picture, yes I was that engaged by them, so that you might help me tease out an answer to this problem. In my absence from meeting people and chewing the fat with them, often about something quite inconsequential, even small puzzles can grow in importance. It's vital that I solve this mystery!

Not really. I slept perfectly last night. But just as pondering about John McAdam has led me to new knowledge, perhaps solving the problem of the "washer" might also do so.

It also illustrates that one can sincerely believe something for decades. And be wrong. John McAdam was not responsible for tarmacadam. The old saying is, "Those who never made a mistake, never made anything".

It is said that an average child, is there an average child? my newest great-niece Holly is beautiful and unique, not average, falls over one hundred times before rising to walk. (Memo to self: Is this another of my erroneous memories?)

Diverting off for a while. Averages can be dangerous barriers to understanding. It's often much more interesting to look at the range of outcomes. Some infants rise and walk without any preceding failures. Others beam from the floor, showing little interest in walking for a disconcertingly long time. And the look of frustration and determination on those who have fallen two hundred times; wow! But the average can include all of this range of experience while little informing us. Even assuming it's true.

Probably the most important point is that my walks are increasing in length as my fitness rises. But a 5-mile day later this week, much lower than the peak of 7.84, will raise both average and median even though it is really my travelling backwards in achievement.

During this COVID-19 infection period, there are lots of numbers, lots of opportunity for confusion. When counting those we have lost to this bug, it's a proper scientific approach to only include people with a solid diagnosis of COVID-19 as the cause.

But for policy-makers, it has quickly become apparent that that could be understating the challenge. So we now have a better number based on any medical practitioner saying COVID-19 was a factor. While that will include some, where that judgement, based on clinical observation, not a lab test, is wrong, it will be a better basis for planning.

As an amateur genealogist, albeit with a Post Graduate Certificate in the subject, it is interesting to look back at how we recorded information about the cause of people's demise 150 plus years ago.

Some is quite precise. My Great-Great Grannie Christian McIntyre is certified in 1877 by a doctor as having suffered from sub-acute bronchitis for 10 days.

In 1876, Great-Great Grandpa Methven Berry is shown as having had a disease of the heart for "some time". Much less precise. And when his brother David Berry left us in 1854 it merely says he was a builder. Zero medical information.

Many decisions have to be made on incomplete or imperfect information. So the professional expertise of advisors is what matters. And, from a distance, we can look with confidence at their performance in helping us understand what's going on.

But ultimately it isn't a matter of averages, medians or any other statistic for those families who are suffering loss. For them, it is a 100%, total loss.

Help during this epidemic comes from doctors, nurses, care workers, concerned neighbours. For most of us, we can assist passively, by what we DON'T do.

Obeying the rules without question so that we don't become the person who carries the virus to another person through inappropriate contact.

Let's avoid becoming a statistic. Or contributing to one.