Yesterday was one of my longer walks, with walking around the house, a daily total of 5.43 miles. Not my highest yet since my social isolation started 20 days ago, that's 6.05 miles, but good enough. Don't you just love these electronic step counters?

I can see a total of 77.16 miles so far. Slightly depressingly, it's a daily rate is only a wee bitty more than it would we were I in Parliament going about my normal business, and including the 110 steps up and down the stairs to the fifth floor. I gave up the lift (mostly), some time ago. But now it's a walk every day, not just the days in Edinburgh.

One of the civil servants I worked with as a Minister, has just sent me some excellent graphics which have translated the advice we need into Doric. Bramble Graphics in Aberdeen have been supplying goods in our North East tongue for about three years now. Well done. Here's some of their advice most relevant to me: 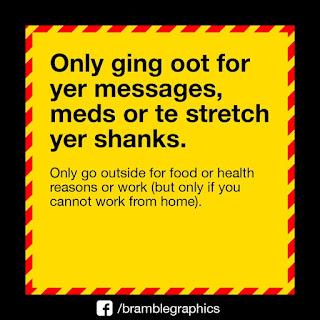 "Only ging oot for yer messages, meds or to stretch yer shanks."

supplemented for the Anglophone by

Now I should tell you that I am not a native Doric spikker. When I arrived in Aberdeen as a student, one of my early bus rides was to Foot of Dee where one of my pals rented a flat. The conductor, remember them? Said, "Fit ye gan t' Fittie fir?", and I realised that there was a whole culture that my upbringing in rural Fife had left me entirely unprepared for.

To this day, while I can understand the Doric, I am far from fluent at speaking it. My spouse's family is from the North and the North East and virtually every graveyard from Cruden Bay to Tomnahurich in Inverness has at least one of her relatives in it. Her grandfather died in Macduff, for example.

But nary a one of them has the Doric. It's like my grandfather, born in 1872 in North Argyll, who came to Leith as a native Gaelic speaker. He produced a daughter who, after leaving school, had not a word of the tongue left. She was punished if she used a word of Gaelic in school.

Ironically my mother studied French and German and went on to teach them.

But our tongue lives on.

Some years ago, I visited one of the Primary Schools In Peterhead. The class had 14 pupils, eight fluent Doric speakers, six native Latvians. They had it sussed. The six had taught the eight Latvian, and the eight had taught their classmates Doric. They now all spoke a creole, a mixture of both, to the substantial bafflement of their teacher—something they found as amusing as they found useful.

It's sufficiently resilient as a tongue that it was only after a few year's acquaintance that I realised that a Doric speaker I regularly met, spoke the tongue with a North American accent. Not because they spent time over there. But because they were American.

But as I walk around in Banffshire, the north end of the area I represent, the accent is a modified generic Highland Scots. Much like the one I could detect my late father using when I spoke with him on the phone. Despite his being of mixed parentage, English mother and father from West Lothian, his being born and brought up in the Black Isle (the Gaelic name according to him being Eilean nam Mucan, not what he described as the faux Gaelic Eilean Dubh) meant he had a beautiful highland lilt.

Our environment shapes us and informs us.

In my walks, I hear a variety of accents. Yesterday a cheerie, "Are you enjoying your walk?" from the person who planted the daffodils at the roadside that I referred to a few days ago, was delivered in a crystal clear local accent as I passed her house.

In Cornhill, a brief exchange about the social isolation, conducted of course across the road, was delivered in an accent more attenuated by contact with people from the central belt? Or was it? A topic for a future conversation.

But not all conversations are immediately accessible to me. Or probably to you either.

As I disturbed a very large gaggle of geese tearing grass out of a field next the road, it was not hard to interpret their cries as distress, as they took-off to fly to a safer distance from me.

The very distinctive cry of a peewit, "pee wee pee wee", as it flew overhead is the only vocabulary of that bird type that I recognise, and its meaning is unknown to me.

A pair of our local buzzards circled above at about 1,000 feet having what seemed like a routine conversation. The larger of the two, by a factor of about two, the female, seemed to be doing most of the talking. Was it a list of as yet unfilled tasks, that she was reminding her mate about? Or is that an overly-anthropomorphic interpretation?

Further up the hill was an all too silent badger at the side of the road all too clearly because it had lost the argument with a road vehicle.

It was a good walk. The winter chill seems to have abated for the time being. No long johns needed to protect my lower limbs. No jersey needed to warm my chest. No cap needed to cover my head.

And that's 19 consecutive walks, of at least 50 minutes each, where I have yet to be rained on.

Ain't a Scottish Spring just grand. Just a shame I can't organise a party to celebrate.

As Bramble Graphics say to me, and you;