By zsstevens Thursday, April 09, 2020
One of the excitements delivered each year is to watch nature awakening from its winter snooze. Yes, there are plenty of things still going about their business in the cold. Some even relish it.

But when you see, as I did yesterday on my walk, your first two butterflies of the season, the commonest of all, the small tortoiseshell, it fair gladdens the heart. Too fast to photograph but not too fast to recognise. With the vast amount of whin flower now out, they won't be short of nectar.

Since my spouse redid the garden about 15 years ago and put a "country hedge" around it, we've seen a significant rise in number and variety of insect life. I think Collins Complete British Insects cannot quite fill the shortcomings in my ability to identify particular types. I can only say that we will probably have three types of bumblebees in 2020 as we have had in previous years.

And other types of bees will likely be feeding on the flowers in my wife's hedge before social isolation ends for me. It is frustrating that my camera kit is in the south. My phone takes very good pictures but lacks the detailed control over focus, depth-of-field, exposure and repetitive shots that my single-lens-reflex cameras do.

Wasps too, don't bother them, and they generally won't bother you, will join the feeding frenzy. Most years we have lodgers in the form of a couple of wasp bings under the eves. The noise as their workers come down to gnaw the surface off the wooden patio table is such that one can hear them 3 metres away. They convert their shavings into the cellulose that becomes the paper-thin, paper-weight material used for their nests. 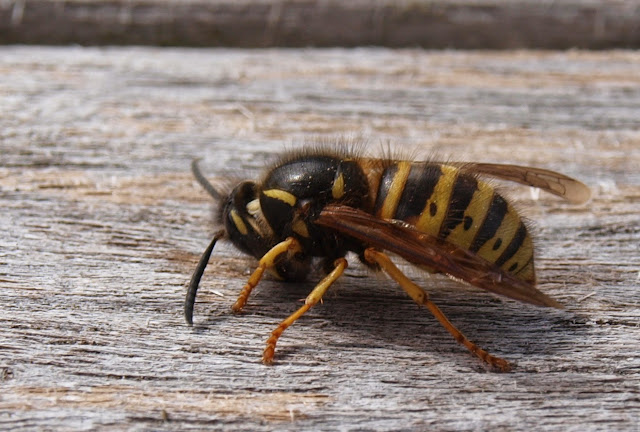 But all that is for the weeks and months to come.

Yesterday the outside tubs seemed dry after there being virtually no daytime rain for three weeks. So they were watered. As night follows day, the sky darkened, and nature complemented our efforts with more substantial wetness.

I have had reported to me, from my god-daughter Darcey's mum and from my niece in Kent, that their houses have never been so clean. Despite both parents and offspring being at home.

During my walk, I observe that there cannot be a weed left anywhere within five miles of our house.

And I have proferred the advice to a pal, that if she must bang her head against the wall, always do it at the same spot. That way the redecorating bill can be minimised.

Speaking of bills, one of the youngsters in my family circle, aged eight, now has her own MasterCard. When I was that age, I had a passbook for my deposit account at the local Savings Bank.

That MasterCard now permits her parents to point to the audit trail of pocket money transferred to it. No more arguments about whether the cash has been provided on schedule.

And now part of her "avoid boredom" strategy is online shopping. In my day, my account was for saving. Indeed, from memory, there is still about 6 shillings in there. Are they paying me interest? Actually no. The minimum amount to accumulate from used be one pound. Probably still is.

Perhaps we might be about to experience a new age of invention. Brains everywhere whirring, undistracted by colleagues and office hubbub.

Innovation is happening in politics. Not invention, but the adoption of technologies new to our political institutions.

The Welsh Assembly held a virtual meeting last week, and later today we shall be able to watch online First Minister's Questions, on this occasion only from Party Leaders.

This is definitely not new technology being used here although it is cheaper and of better resolution and lower latency than in years gone by.

I first routinely used teleconferencing for a weekly project conference about 30 years ago. Software developers in Edinburgh and in Perth, Western Australia, met at 0800 for us, and at 1700 for colleagues at the other side of the world.

This all worked well until the clocks changed, I wrote yesterday that this was a bad thing, when we all turned up at the wrong time. It turned out that we had failed to set up our joint project files database and diary to account for this.

And similarly, I guess moving to virtual parliamentary sessions will progress via some, hopefully minor, difficulties to a new paradigm that may end up permanently woven into our methods.

But it probably requires more than simply a "lift and shift" of existing methods of working into an electronic world. Like others, I noted a tweet from Ruth Davidson for example, moving "Have I Got News For You" from the TV studio to feeds from each of the panellist's homes meant we lost the sparkle of the previous arrangements.

When you cannot so readily spot the "body language" response of someone to a comment, the quality of interaction falls away. And the loss of the opportunity to make a sideways comment to solicit an audience response was pretty much fatal to the spontaneity and interactiveness which had come with the studio-based format: a good try but only three out of ten for me. I switched off quite quickly.

When our political system is as central to our lives and futures, more so today than at any point in our recent past, we cannot have adoption of new technologies in Parliament done in a way that similarly leads to "switch off".

On a cheerier note, for gulag Stevenson at least, today is shopping day. We're managing to keep trips out to an absolute minimum, our last was nine days ago, and the one before that a further nine days earlier. We shall be at the nearest store which has a pensioners' hour when they open at 0830.

Being in the country as we are, it's a 45-minute drive each way. But it will bring refreshment for the inner person for another nine days. And a very little-two metres apart-interaction with the rest of the human race.