By zsstevens Monday, April 20, 2020
"Jeg snakker ikke norsk" is the only Norwegian I can speak. And even then, I am told that my pronunciation is so appalling as to render it all but unintelligible to a native of Norway.

Word has reached me that Liam Kirkcaldy, humorous writer et al for Holyrood magazine, is scanning the backdrop to my broadcast into Friday's Parliamentary session. This, with the objective of seeing if he can make some funny, or even scabrous, comment on my choice of reading material as seen on the bookshelves behind me.

I fear he may be disappointed. Like many of our bookshelves, he will find a predominance of detective novels with an admixture of travelogues, biographies and "Scandic Noire." The really interesting stuff is in another bookcase alongside my armchair in the opposite corner of the room. Accessible without the inconvenience of my having to rise from my seat. So dream on Liam. And out of camera shot.

As it happens today, the 20th of April, is the 179th anniversary of the publication of Edgar Allan Poe’s story, "The Murders in the Rue Morgue." It appeared in Graham’s Lady’s and Gentleman’s Magazine and is generally considered to be the first detective story.

As a US citizen, it is interesting that his setting for his novel is not in his home country. Much more reassuring that murder and mayhem should take place abroad. Similarly, in my youth, a detective, the television adaptations of stories about him still grace our TV screens as repeats, Maigret, was also a resident of France.

Many years ago we had the misfortune to have had our hire car broken into in France while it was parked in the street on a Saturday night. The break-in was effected by the simplest of means. A claw plier was used to grip the lock on the door; pull it out; and then rotate it to open the door.

The thief had slim pickings for his (her?) efforts. All that seemed to be missing was a couple of maps. We always made sure to remove valuables from our car on such trips. I guess our car was targeted because of its "75" registration plate. Being a Paris number, it immediately signalled that we were strangers in rural France.

But small as our loss was, the damage to the car had to be reported according to the terms of our hire agreement. A visit to the local Gendarmerie ensued. Their local station was simply the front room of his house. A big sign above his from door guided us to him.

Sunday morning was not a peak time for action. We sat down in his little office to progress the creation of a crime report. The typewriter was lifted out of the cupboard and placed on the table. Multipart forms, separated by carbon paper, were inserted into the machine.

It was at this point that one aspect of my academic indolence came into play. In 1961 I was in Tommy Muir's ordinary grade French-language class, I was in my third year at secondary school, and I distinguished myself solely by my failure to engage in learning anything of the language. Indeed my first term exam mark of 9% was so unimpressive that I was invited to leave and to concentrate on my Latin where I as was achieving the steller heights of a mark three times as great.

But by the time of my attending this rural centre of crime detection, I had some progress with my French.

When I used to read the Maigret novels, in their English translation, I picked up quite a lot of French slang, "en passant", as they say. The translators retained the "Frenchness" of George Simenon's novels by leaving some of the spoken words in their original language. And explaining their meaning in footnotes. Thus, sort of relevant to our current predicament, I know to this day that "les salade" are police vans; "les flics" are policemen; and that "ma petite choux" was a term of endearment to address, with care, much care, to a person to whom one wished to be romantically attached.

As it happened, the circle was squared in that the translator of many of these books was a lady called Lynn who just happened to be the sister of a best pal of mine.

Visiting France also meant that I acquired some of the language needed for commercial discourse. "Avez-vous un kilo de pêche blanche?" might lead for example, with intelligible pronunciation, to the acquisition of some delicious white peaches. In later years I was able to acquire my pilot's licence in France. In the right context, I found I actually could learn French. But in the "aride" environment of the classroom, no.

At no point had the vocabulary of either my spouse or I reached the standard required to be able to give evidence in the formal language required for a monoglot French policeman's report. Help was at hand. His 12-year-old son was studying English at school and was in possession of an English-French dictionary. By constant references to his dictionary and frequent searching of it on both our parts, we ended up with the piece of paper which we required.

I have to say that our interaction with this gendarme in no way mirrored the narratives of any crime novelist that I have read. So similarly, Liam Kirkcaldy is on a warning that the books behind me are a sample, not necessarily a representative sample, of my reading. Not its totality. 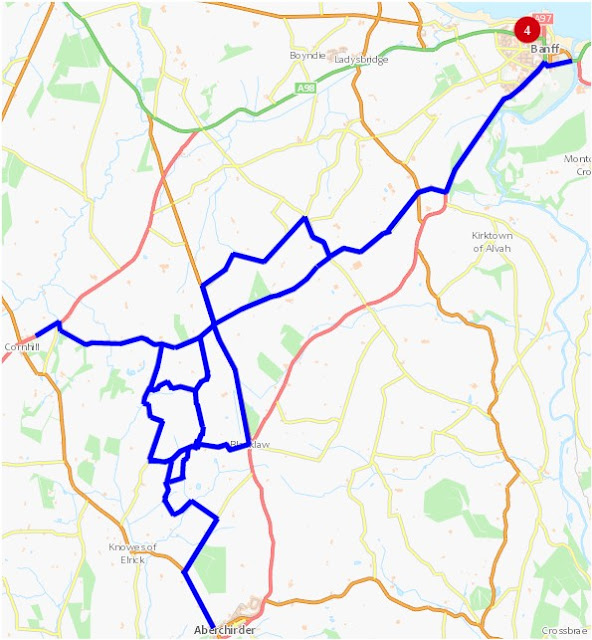 Today will see further online sessions and engagement with my constituents' concerns. And another walk with some further new bits of road to be trodden. But as the above diagram shows, I've walked the blue bits, I am beginning to run out of walking novelty.

This week will also see, subject to Parliament's agreement, the establishment of a COVID-19 Committee, and my appointment as a member of it. A key opportunity to learn from the current crisis and to identify future actions that may enhance our resilience for when we meet future challenges, as we undoubtedly shall. Experience is a better teacher than the classroom.

An evening beckons when I expect to return to a murder mystery, translated into English, thank goodness, from the Norwegian.