By zsstevens Sunday, April 26, 2020
Today is day 41 of lockdown for me. And with my cumulative my total walking exercise at 197.34 miles, it will as I suggested yesterday, be the day I cross the 200-mile "barrier".

But it is also the first day, if memory serves me correctly, where we have 8 octas of cloud cover. No blue anywhere but a scrap of brightness to the east suggesting that as the sun rises in the sky, it may burn some holes in the overcast.

More importantly, the garden is showing early signs of produce of value. The mint and chives are rising from the ground. There is nothing lifts a plate of food more than the addition of herbs fresh from the garden. A pot of shop herbs is fine but does not come covered with morning dew. Later the fennel will rise to the point where I can routinely nip a mouthful off as I pass and feel no guilt as I will barely affect its normally luxurious growth.

The new rhubarb planted last year shows early signs of growth and the six new gooseberry and blackcurrant bushes carry encouraging amounts of blossom. And that's fruit which will add to the stock of frozen fruit for winter use. Apple trees beside them flourish. Personal optimism and good heart rise.

Elsewhere when I am out walking, it is the sound of farmers and their machinery that dominate. But not to the extent of drowning out the bird song, that's an important part of spring's mating rituals for many species, nor the buzz of the early bumblebees that now exploit the hedgerow flowers. Mainly still whin, but with some early broom beginning to appear among it. The vivid yellow is the dominant colour that assails the eye even if the green backdrop of grass and spring barley is objectively occupying more of the countryside.

I suppose you will have given no thought to the process by which I write my daily diary. Why would you? I reveal now that it is rarely a continuous process. And one important break has just taken place. I get the call from the kitchen - "dishes" - and move to pick up the towel to dry the dishes as the boss transfers them to the drying tray. And then to put them away in the cupboards.

The walk to the cutlery drawer means I look out into the garden through the glass door between the kitchen and outdoors. I frequently see rabbits, a big cock pheasant and other assorted birds, and the occasional fox. But just now, 3 minutes ago, and for the very first time in the 17 years we've lived in this house, a pine marten has just passed from right to left at the bottom of the garden. Indeed it is the first pine marten I have ever seen. 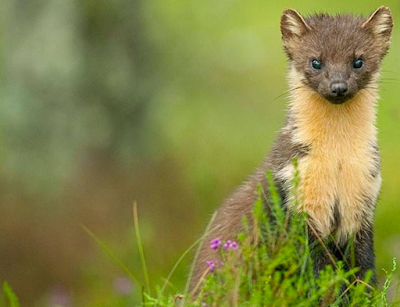 The recognition points according to Wikipedia - up to 53 cm long, with a bushy tail of about 25 cm; weighing 1.5–1.7 kg - absolutely spot on. The cream to yellow-coloured "bib" marking was particularly distinctive. I had always thought them the size of a red squirrel. Clearly wrong. They are the size of a small cat.

My spouse is very irritated by all this. Firstly, because she did not manage to make it to the door in time to see the beastie. But secondly, because she has been canvassing strongly, and for some time, for me to buy and install wildlife cameras. My sloth on this matter is going to have to be addressed later today if it is not to become a matter of serious and continuing friction.

She is not the only canvasser to pitch into view this weekend.

My walk yesterday took me on one of the diminishing numbers of new routes available to me. And one of the farmers to whom I referred earlier, greeted me cheerily as he stopped to close the gate of the field he had just left. He zoomed up the road but returned within about five minutes.

He stopped adjacent to me, opened the door of his tractor and indicated a desire for conversation. Maintaining a proper two metres of separation, it would be fair to say that we spent the next 10 minutes in a robust exchange of views. Mannerly, and properly conducted, but robust. Little of it on farming or COVID-19.

It turned out that he as drove home, he had twigged that the only person with vividly designed galluses, known in the area - was me. The fact that I was wearing a large Australian bush hat to keep the sun off my face had not protected my anonymity. I was his, well actually definitely not "his", MSP, our political views are unlikely ever to converge.

His opening salvo was to accuse me of breaking the social isolation rules by being about 4 miles from home. "No", I responded, pointing out that they permit my leaving home for exercise once a day provided social distancing continued. I could have also responded that his driving back to engage with me was not within the rules. But chose not to. I suspect he will not repeat the "offence".

At the conclusion of our "debate", he drove off again, clearly turned around quite soon and tooted and waved cheerily as he passed me again and resumed his drive home.

I suspect that I relieved some of his isolation boredom, he is my age and thus another 8th decader, and that that underlay his choosing to return and engage with me.

Early afternoon saw my video-meeting with Darcey, my oft-referred-to god-daughter and adults in her circle. She seemed in fine fettle and came forward in the discussion. That was good, because like I too was at her age, she is a natural "watcher" who carefully considers her interventions and controls the impulsive side of her nature. So like me, it ain't true.

But text exchanges later with mum revealed that she is finding the lack of contact with her chums desperately difficult. And I suspect she will not be alone.

So I will be sending her an email later today with some thoughts about a project for her period of isolation. It simply won't be enough to point out that I will, almost certainly, be isolated much longer than is likely for her. So I won't say that.

I think she will have some good ideas locked away in her cerebral cavity. I just have to find a way of bringing them out.

Tomorrow is day 42. The "Hitchhiker's Guide to Galaxy" describes the finding of the answer to the ultimate question, and it took millions of years to find it, by which time people had forgotten the question.

Will the forty-second day bring the answer?

No. But we will be another day closer to it.