101 Primer for being video-online: Part 2 - Presentation

By zsstevens Saturday, May 23, 2020
Yesterday I wrote about preparing to go "on-air". Today, it's Lights, Camera, Action.

In a professional TV studio, an illuminated sign "On-Air" will switch on above the door to warn people to keep quiet and be aware that cameras are broadcasting.

Many things happen behind the camera that the public does not see. I have sat in the corner of the BBC's Reporting Scotland studio playing pontoon with some of the stage-hands while Sally Magnusson read the news.

And rescued a cameraman who, in his enthusiasm to obey the producer's instruction to reposition his camera, got his leg tangled in the cables, tripped and fell forward with the camera a mere six feet in front of Kirsty Wark who was speaking to an adjacent camera. I saw it coming and had dashed forward and caught him, and his camera, just before he hit the floor.

Risks in a home studio are less extensive and more banal. For example, The First Minister's daily press briefing yesterday was enlivened when the daughter of the Sun's political editor joined him "on screen".

The rule in our house is simple. Study door shut; On Air. That doesn't mean that my spouse is forbidden from quietly entering to provide a caffeine top-up during a long online Committee meeting. Even though my notorious mechanical clumsiness with a full mug dramatically ramps up the prospect of an on-screen disaster. I am someone who will not fail to put a clean paper napkin in his pocket when opportunity allows. Former Boy Scouts remember to "Be Prepared". I always carry something to mop up with.

But back to the broadcast. First, a very small technology briefing which will influence how we should behave on camera.

The camera on the computer I use is, like most of them, quite basic. It has captured 720 lines of information to build each picture with 1280 individual points in each line. That's better than a standard TV picture but a wee bit worse than a high definition one. So we have the makings.

Our TV gets a new picture 25 times per second (strictly it gets half a picture 50 times; don't worry about it).

Each time our computer takes a picture, remember 25 each second, it creates a file of about one hundred thousand characters (Note to my techie colleagues; it's actually more, that's a JPEG file which uses a "lossy" compression algorithm).

Thus twenty-five of these, means we are capturing about two and half million characters every second. From my house, it has to travel down a rather elderly copper cable to our little telephone exchange about four kilometres away as the crow flies (the cable is longer as it is not a straight line). So what size of a pipe does my data travel down? Can it carry two and half million characters every second? The answer is - not even close.

You can check the size of your pipe, or strictly two pipes, one delivering data to you and the other taking your data away, using OFCOM's line speed checker (https://checker.ofcom.org.uk/broadband-test). 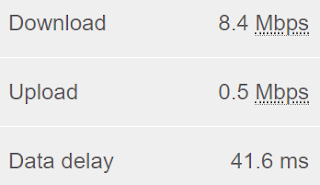 The one that matters here is the "Upload" number which tells you the size of the pipe which will be used to send your picture out to an eager audience at the other end. My test this morning shows "0.5 Mbps". That's half a million bits per second. We need to remember that a character needs eight bits. So 62,500 characters per second can be sent down my pipe. That's an awful lot less than the two and half million I want to be sent. In fact, only a fortieth of the characters can be sent. (Note to techies: I know it's more complicated but ..)

But this where our own behaviour on screen can help. And a bit of clever software.

If I am careful, the only bits of me that may change from picture to picture may be my mouth and perhaps my eyes. That might just be a tenth of me. Bingo we have 62,500 characters to send-exactly the size of the pipe we have.

Also worth thinking about standing when it's a speech. Further from the camera equals less movement in the picture. It also helps speech delivery by changing the way the diaphragm works with the lungs.

You don't need to be a technician to guess that there are some pretty large assumptions in all that I have just written. But the bottom line is that if I minimise my movements, no hand-waving, no moving side to side, no leaning into or away from the camera, my actions help the transmission of the picture.

But the software on my computer has other things it must send down the pipe (ACKs and NAKs to name but two; don't bother to ask). So it also starts to strip out some of the detail. The picture becomes a quite soft focus.

Compare what arrived in Edinburgh with an original picture of me. The more observant of you will notice that my suit has a pattern of thin lines in the clothe's weave. The software has blurred that away; a plain grey suit appears. You may see that I need a haircut and have not shaved for a day or two. Not visible after the picture's been squeezed down the pipe. Not all bad news. And my tie appears to have changed. Actually, that's true. I took the second photo a wee bit later and got the wrong tie off the rack. Ho-hum. (Click on the picture to see the fine detail)

So the key message to help make the best of the equipment is "minimise movement". And if you've managed to keep up with my somewhat laboured explanation, you now know why.

But that also helps the presentation.

I always watch the Parliamentary videos of my speeches on youTube, 822 so far since you (didn't) ask. My spouse and my media-savvy staff draw presentational defects to my attention. In particular, I hop from one foot to the other, thus moving from side to side. Watchers find this distracting.

As Homer said, "The mind is more slowly stirred by the ear than by the eye". And yet we Parliamentarians think it is our words that matter most. If we don't remove distractions from our visual image, how we behave "on stage", the impact our words are intended to have, slinks into the shadows.

So think about our body language, confident of gaze, shoulders back, still, and we create the space for our words to make the impact we desire.

The speaker's needs to reach the audience, the technology's ability to smooth the path for the message, are served by the same behaviours.

Stand still over there please!