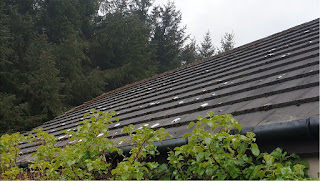 I had not expected to find myself tweeting a picture of snow falling on Banffshire yesterday. And yet it was, and I did. This morning there is a little snow lying on my car and on our roof.

It was sufficiently intermittent to allow me to leave the house and start my daily walk. Within twenty minutes it was on again. I opened my mouth to freshen my palate and lo, a great surprise, the snow tasted of salt.

Then I lifted my head and looked out to the North East where the Moray Firth could be seen. That was the direction from which the big, actually a bit smaller than usual, black cumulonimbus cloud from which the snow was being deposited had travelled. I could see another one a few miles away, awaiting me later in my walk but on arrival choosing to fire pellets of hail at me, rather than snowflakes, when it reached me.

The cumulonimbus clouds were quite central to the meteorology part of my pilot's training some thirty years ago. In the international standards for aviation weather forecasts, each cloud type had an abbreviation. The code for cumulonimbus is CB. Universally nicknamed by pilots as "Charlie Bangers".

If you have ever been on the flight deck of a well-equipped aircraft, one would see a weather radar display upon which different cloud types would be rendered in different colours. CBs are shown red. For a good reason.

When you see a cumulonimbus cloud, it will normally be black. It looks a bit like a blacksmith's anvil-a big long flat bit at the top and a thinner column upon which it sits. The latter is a centre of rising air and around it a ring of rapidly falling air. The difference in airspeeds between the rising and falling air can be thousands of feet per minute. That's enough to break an aircraft flying through it. That's why pilots want to know where they are.

Yesterday we saw a bit of political cumulonimbus move rapidly along on the distant horizon. Hot air rising with a douche of cold air all around it. You can read about the detail elsewhere. The bottom line is that the Stevenson household policy will remain aligned with our government's "Stay at Home" message.

That advice has seen the vital R0 number fall from about three, meaning a pandemic rapidly growing, to just under one which means we've begun to control the wrestling contest with COVID-19. But there are many rounds in this match, and we need a knock-out to win.

And that salt in the snow? The rising column of warmer air in that black cloud that was throwing white stuff at me would have been sucking up saltwater as it crossed the sea about 4 miles away. An interesting natural phenomenon but an unhelpful one for our farmers. Dropping salt on growing crops inhibits some of the good things they seek from their efforts.

As in nature, in life, in political discourse.

The start of a new week sees further ramping up of Parliamentary activity. I shall have two online meetings today. Two again on Tuesday and three the following day. Our Parliamentary broadcast team have worked hard to get the technical setup working well. And the results can be seen on our YouTube channel.

But the main challenges remain at the MSP end of the line. We have two technologies. One to use when we are broadcasting, another for private meetings. They do the same job and broadly speaking look similar. Some of the differences matter and are quite subtle.

When we are broadcasting, the central team switch microphones off and on as required, just like being in the Parliamentary chamber or a committee room. But when we use the other software for private meetings, the MSP has to switch on their microphone by pressing on an on-screen logo. The logo is in a different place on the screen and may not be visible at all until you touch the screen or move the cursor to the correct place.

Because the systems look quite similar, some find it quite easy to forget that there are differences.

For Tuesday in particular, it will be our first debate where most MSPs who are taking part are in the chamber as usual. But some of us will be in our home studios using a PC to link in.

During Committee sessions with us all at our "home desks", there's been quite an effort to get us all about the same distance from our cameras and at the same position on the screen. Sounds a bit fussy but it does improve the visual quality of the broadcast program.

The Parliament's standard-issue laptop computer is a fine device for most purposes but the screen, the camera's at the top of the screen, cannot stand perfectly vertical without falling over. So we have quite a few colleagues who are looking down into the camera. One can understand why some MSPs' natural antipathy to technology has grown a bit.

In the chamber tomorrow, as always, MSPs stand up to speak. I have been fiddling around a bit to get a shot that shows me standing rather than the sitting shot that we've been using for Committees. So that when I dial in it will look as similar as possible when I speak from home. That involves using a step ladder to get the camera high enough up and might mean having to swap to a camera showing me sitting when not speaking. I don't know if they will want a "wide shot" with me in it when not speaking.

I will have six minutes of speaking time tomorrow. For me that's 792 words. If I were in the chamber, I could see a clock on the wall. The Presiding Officer would intervene if I go over time. At home, I will have to remember to start the timer app on my PC.

But at the end of the day, the technology should be all but invisible to anyone watching. I have often said that computers will have finally triumphed when we no longer realise they are there. It's the debate that matters not the medium which brings it to them.

For techie me, it is twenty years since my first retirement, and thirty years of earning a living before that during which I spent my waking hours bending computers to practical uses. Today I must actually put my technology issues to one side and focus on the policy matters in my intray.

Otherwise, I shall be the next cumulonimbus disrupting a debate which must be informed by science.

An incunabulum, hiding away that which really matters.

We need to focus on defeating a virus, not a technology.