By zsstevens Wednesday, May 13, 2020
It's unlikely to evoke much sympathy from the general public if I state that yesterday was a pretty exhausting day for me.

I rose at 0500 hours, read the world's media while consuming the porridge and fruit that is my usual breakfast. That's a necessary part of the day that equips me to be able to respond in an informed way to the kind of things that will likely be in the minds of my constituents and others with whom I will interact during the day. As a by-product of that, I will also have been sharing on social media the links to stories I found of interest.

I then have the self-appointed task of writing my daily diary. That generally checks out at about 1,100 words and takes approximately another hour. In a sense it takes a bit longer than that because from time to time during the day, an idea of what I may write about pops into my head and I jot a note down to remind me later. Some days I face a blank sheet of paper. Not often because, even in social isolation, I am interacting with the world around me, media, constituents' concerns, my observations of the world around me as I exercise outside. And my spouse too is keeping an eye on what's going and will pop into work (otherwise known as my home office) with tea, encouragement, disapprobation about the disorder of my desk and its environs, and updates from the broadcast world she is constantly monitoring.

Shut away we may be. But cut off we ain't.

The most difficult part of the hour's writing is not the writing. It's actually the proof-reading. And that may extend over a couple of hours until my self-imposed publication hour of 1000 hours is reached. Not a continuous process. Rather a periodic return to the task interspersed with other activities.

Reading one's own words and trying to spot the mistypes, mis-spellings, unfortunate solecisms, and sheer unnecessary complexity of expression is actually very difficult. Because one reads what one thinks one has written rather than what one has actually written. I have to fool my brain into seeing it for the first time rather than it just being a confirmation of what it already thought it knew.

Using the word-processing editor to change the font, generally from a san-serif to a serif font helps. The serif is that funny squiggly bit that hangs off the end of letters. Or which may be absent (san = without). Enlarging the font too assists in breaking the mental set that gets in the way of good proof-reading.

Yesterday was a particularly early start to the day (today is even worse; I rose at 0440). Because the schedule showed it was to be a heavyweight day.

First up was the COVID-19 Committee of which I am part. A second Bill is having to be considered and the Committee's meeting is the first part of Parliament's deliberations on its contents and ommissions.

It is not simply a matter of "turning up" at 0900 hours to discuss matters with colleagues. Emergency or expedited Bills, this is one of the latter, proceed at a potentially dangerous pace; a pace that risks our missing something. The Bill and its associated papers, things like the Financial Memorandum, which tells us about the anticipated costs of implementing the legislation, was published a mere twenty hours earlier. And requires considerable care in reading as a single word, misused, mistakenly included, carelessly omitted, can have significant legal effect.

We generally have some help in coming to a judgement. In this case, in the 20 or so hours referred to, others beyond Parliament have been reading it. The Law Society of Scotland has been scrutinising its contents and intent and will appear before us to answer our questions.

For my part, I will have quickly read the Bill once. Done that in the first 60 minutes after publication. Re-read it to mark those parts I want to scrutinise more closely. Read those parts again to confirm my understanding or the lack of same. Worked out what my questions might be. These cannot just appear from thin air.

In this case, I also spotted what I considered to be an omission and drafted two amendments which I submitted to the Parliament's legislation desk for them to tidy up my words and put into proper legal form.

When I "tuned in" via the electric internet at 0900 yesterday to our Committee meeting, I was sharp as a tack and fine-tuned with knowledge and understanding of the Bill's subject matter. Or at least I had some sense of my difficulties.

Two hours later, the Law Society had answered many of our questions and helped us understand some of their concerns about the Bill. Fortunately, none appeared to be major.

Then it is the responsible Cabinet Secretary "dialling in" from Argyll to answer questions.

Finally, we discuss as a Committee our reactions to what we have heard. And consider what our report to Parliament might contain and whether we wish to recommend that it should agree to the general principles of the Bill. That needs to be done by 1000 today. It's needed before this afternoon's Parliamentary debate.

The Committee ends its meeting at about 1215, three hours after starting and nearly seven hours after I commenced work for the day.

That leaves 75 minutes for lunch. For considering how I will deal with my speaking in a debate in Parliament in the afternoon. And setting up my office to be the studio from which I shall broadcast to the debating Chamber in Edinburgh and to the world.

Because the online meetings we have had so far, have been Committee meetings. When physically present, we sit around a table and discuss the matters before us. But in debates, we rise to our feet to speak. We project our voice out to those present. It looks, feels and sounds rather different. And I wanted it to look proper. 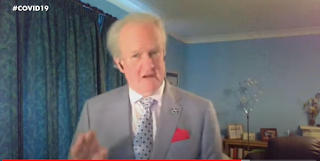 The result I thought worked rather well. And the rather thin "pipe" down which the picture and sound were carried to Edinburgh, I don't have anything vaguely like superfast broadband, behaved properly. The new suit I had acquired just before having to be excluded from Parliament, enjoyed its first wearing and looked awfully bonnie.

But as the picture below shows, the setup in my home office is pretty Heath-Robinson. A ministerial box, Scottish ones are blue in contrast to Westminster's red, stood on its side to provide the required height for the camera in my Chromebook laptop.

A pile of books elevates another PC with my script, written during the debate and sent in draft to the Official Report a few minutes before I spoke, to a sufficiently elevated eye level to mimic my reading from the podium I would have had in Parliament. Ad hoc but sufficient. Oh, and carefully positioned light. 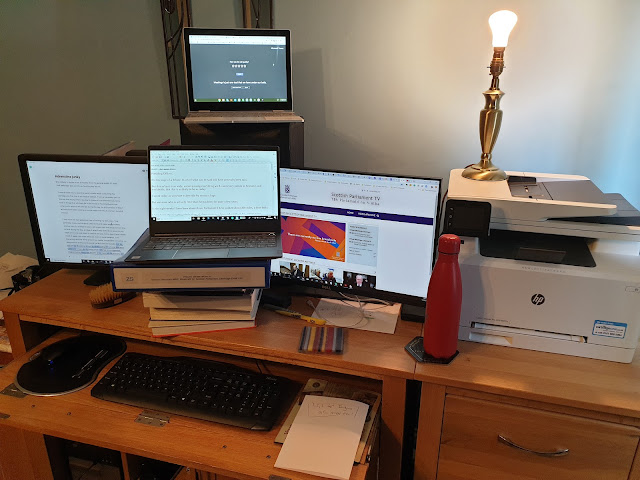 So on-air in Chamber from 1330 to 1730, another four hours. And because of the monitor in Parliament almost constantly showing the view from Banffshire on a very large screen, no opportunity to relax my posture.

Indeed I received an urgent text from a colleague to encourage me not to lean back in my chair. I seemed to be in danger of adopting an unhelpfully relaxed image similar to that which the current leader of the House of Commons will ultimately have as the illustration which will accompany his obituary.

A brief break and we are into a pre-meeting discussion of the Rural Committee. It finally concludes and allows me to leave my "studio" at 1845. Most of ten hours in front of the camera. Now nearly fourteen hours since I awoke. Frazzled.

And the draft report from this morning's Committee meeting pops into my intray. I read that while ignoring my spouse across the dinner table.

Am I complaining? Actually no. It's been a high energy day with adrenaline flooding through my blood vessels pretty constantly. And that's one of the most addictive of hormones. Slightly dangerously so yesterday because it occurred while I was fairly constantly in a sedentary position.

Yesterday was the first day in eight weeks where I could not find time for a single minute of physical exercise.