By zsstevens Saturday, May 16, 2020
That's my weekend fully scheduled. As a member of the COVID-19 Committee in our Parliament, I will be fully committed to reading, and more critically, understanding the fifty-five amendments tabled by Parliamentarians before Monday. But a quick look at some of them makes the understanding bit rather optimistic.

The trouble with legislating at a rush, and yes, I have previously made reference to this, is bad legislation can result. With individual amendments stretching over multiple pages, this is not simply about "tweaking" the Bill. It's an effort to introduce whole swathes of new policy without the benefit of adequate outside scrutiny.

In some cases, if passed, they would require substantial diversion of effort away from the front line in the battle against COVID-19 to administrative tasks.

Ok. Grump over. A serious look beckons. Where I must use an objective inner eye to consider what's before me, and I can see there are some worthy of consideration. Not merely my two wee drafting change proposals. Others of some more substance.

As preparation, I need my mind and body fully fit.

Last night was another online ZOOM with my former information technology colleagues. Our numbers have grown as others, who have become more widely dispersed since retirement than the group of us who previously met for dinner once a month or so in Edinburgh, have been tracked down. ZOOM allows conferences, at no cost, that last up to 40 minutes. Our unstructured, no-chairperson, group can consume that time almost in a single gulp. People talking over each other. Subjects bounding away from the current topic. In short; total chaos.

But that pseudo-anarchy is just like our being physically together in one place. No motions are tabled, no decisions debated, no actions agreed, just like normal life. Indeed, only the merest hint of any social etiquette. Real-life in the electronic, social distancing age.

And to provide a sanity top-up after my involvement in the complexities of legislation in the week to come, Mr WhatsApp has allowed a discussion which has led to another online "social" this Thursday coming. With my god-daughter en famille. It's in the diary.

For many people, probably most, social isolation is a depressant rather than a stimulant. But electronic connection, with images, not just a voice over the telephone, helps.

Curiously for me, some of my mental "sniffles" have all but disappeared. Mental health is like physical health. My daily walks, and now some rowing machine exercise added in occasionally, have lifted my heart and lungs to a new and better place. My peak flow meter, the practice nurse insisted that as a former asthmatic, I should have one when I saw her a couple of years ago, continues to show growth in my lung capacity.

My smartphone can measure my heartbeat and the proportion of my blood cells carrying oxygen. I take a measurement immediately after exercise and 10 minutes later. That helps judge recovery time. The faster one's vital signs return to normal, the fitter one is. There's some indication I am on the right road there too.

The phone's app also asks about my mood when it records the objective heartbeat rate and "sats" score. And on every occasion over the sixty days when asked, I have responded "happy".

That is just the headline mood. Not an indication that all sources of a contrary mood have disappeared. Missing meeting my pals is on the negative side of the balance sheet. And losing two close friends, one to dementia, the other to a stroke, over the last few years surfaces to weigh down the scales on the wrong side.

When you lose contemporaries, morbid thoughts about one's own future can occupy some of one's thinking. But, somewhat unexpectedly, such thoughts of mine have all but disappeared in the last sixty days despite the introduction of a new source of mental stress - social isolation.

I think that's for several reasons. Regular, timetabled in my calendar, physical exercise has not just raised my body's metabolic activity, but seems to have helped to flush mental "lactic acid" from my brain.

In the physical body, lactic acid is produced as a by-product of metabolising glucose for energy and is a waste product that causes a burning sensation in the muscles, or cramp.

But the discipline of having to write for an hour each morning is probably equally helpful. It's a review of what I have, or perhaps have not, been up to, that probably helps achieve a proper sense of perspective. "How lucky I really am, even if it's difficult, when compared to others" versus "I am bored. I don't feel in control."

My calendar now contains a larger proportion of what are my plans. Previously it was mostly others' demands recorded there. That's the evidence of my re-asserting control over my own life. A mood booster if ever there was one.

With my having taken the decision to retire next year, I will be 75 years old then after all, the mild anxiety of looming retirement and disconnection from my current life has all but dissipated as I have developed a practical vision of the next phase of my life.

Now I have just had to, had to, break off my writing as a familiar cry from outdoors intrudes. I dash out the front door, closely followed by our red cat Donald who also wants to investigate the source of the cry. 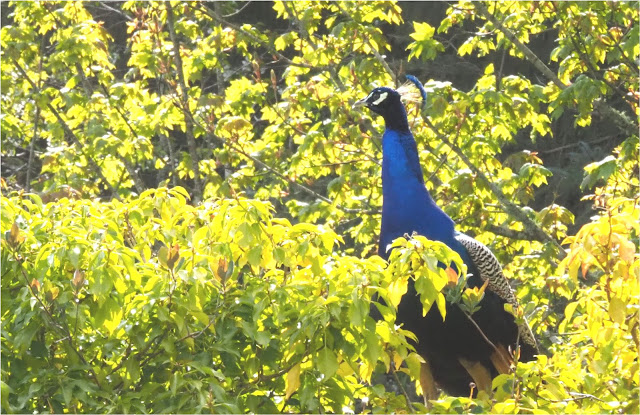 Both our cats will always move to full alert when a child cries in the vicinity. But this was curiosity, not paternal concern that has called him outside. Like me. Although I had recognised it as a peacock call and had grabbed my camera before my exit.

It sat on our wall and at my attendance flew onto our roof and from there into our kitchen garden. It's been in the area, quite a wide area, for well over a year now. So it must be foraging successfully for food as a feral bird. Good luck, mister.

Now that was an illustration of my new living. An interruption came to me and I, I alone, decided to accept it. I am in control and happy with it.

Oops! A message from the Whips has arrived in my inbox about next week.

Not quite all of my life is my own.