101 Primer for being video-online: Part 1 - Preparation

By zsstevens Friday, May 22, 2020
Somebody asked me for this. And like any such description of how I do what I do, it might not suit everyone. Tomorrow we'll talk about some "techie" bits and the "performance".

One of the enduring mysteries for someone working at home is why it works well for some and badly for others. The voice drop-outs, the frozen picture, the awkward framing of the participant, can all contribute to a sense of amateur hour at the local pub. Remember them?

I first started using video-conferencing for real when I was part of a joint information technology project which was a collaboration between a team in Perth, Australia and Edinburgh, Scotland. We had a weekly project meeting at 0800 for Scotland, 1700 for Australia. It was over what we would think of as an impossibly slow communications link. And it worked. Until the clocks changed when we missed each other for a week.

Today video-conferencing is widely available, mostly free, and can use equipment and connections of a vastly superior kind that most of us already have in our home.

So why are many of us finding it so difficult to deliver professional results? Part of the answer is technology. And part is how poorly we humans are using the technology.

Getting it right in our home.

If we go to a broadcaster's studio there's a ritual about it. We are greeted when we arrive. Offered a cup of coffee, shown where the toilets are, generally welcomed into a supportive environment and made to feel welcome. They want the best from our appearance on their show. And we will be at our best when we are attentive, fairly but not totally relaxed, not rushed.

Is that how it is at home?

Are we at our desk early enough to relax into a comfortable seat in front of our computer's camera? Ten minutes before "On Air" time minimum.

And have we arrived dressed for the occasion? Tee-shirts are comfy for us but are they engaging for someone watching? My slippers are my footwear of choice when broadcasting from home. But no-one sees them. Comfort can rule from the waist down. But appearance matters from the waist up.

On the left of my desk is a hairbrush and comb. If your PC uses Windows software, type "Camera" into the "Type here to search" box at the bottom left of the screen. You now see roughly what the other end will see. Reach for that comb and sort that hair. 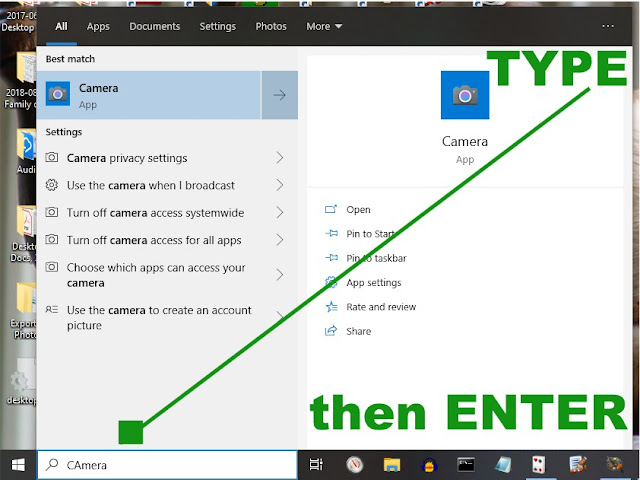 Simple rules for composing the picture.

Rule one: your eyes should be one-third of the way down from the top of the screen and the screen should be perfectly vertical and at the same height as you are

Rule two: your head should be equally distant from the left and right sides of the screen

Rule three: you should be looking at the camera, or a point close to it (do you know where the camera is? if uncertain, move a sheet of paper just above the screen surface until it blocks the camera. mentally note where it is)

Rule four (alternative 1): if sitting (as one might be if participating in a meeting around a table), you should be the right distance away from the camera that your head fills half the height of the screen

Rule four (alternative 2): if standing up (as giving a lecture; speaking in Parliament) you should be further from the camera so that your head fills about one-third of the height of the screen
AND
put a book on the floor immediately in front of each foot so that you know exactly where to stand when you go live on air (your "mark")

Rule five: check what's in view behind you, in particular look in the corners of the shot, and avoid have any vertical line appearing to "sprout" from the top of your head 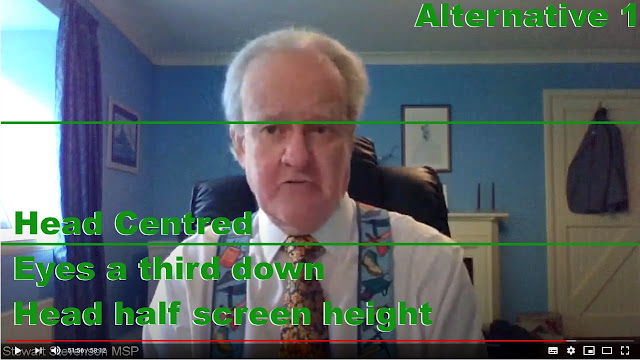 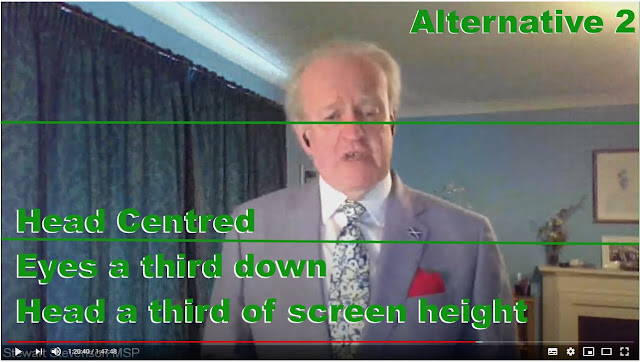 Briefly on lighting. A light above and behind, the overhead light. Provides what photographers call the "contre jour" (against the day) effect which provides a slight halo on the hair.

And a light on the opposite side and a bit behind the camera to illuminate the face. All the lighting should be artificial light or all daylight. Mix them and colours may be distorted or excessive contrast created. (See the first picture above; not great is it?)

Finally, record a little bit of speech via the camera application. Do you need to speak up? Or quieten down? Because the acoustics of your home studio is likely to be influenced by hard walls nearby, it will not sound like a studio or Parliament. All that matters is that it can be clearly heard.

Now close down the Camera application. Indeed now is a good time to close down everything that's running on your computer. Restart your Chrome browser which you will need for the broadcast (other browsers might work but you're on your own from here on). Leaving other applications running, even though you cannot see them on screen, risks their "stealing" resources from your video-conferencing at random times. Not good.

The first time you do all this it will take more than ten minutes and is probably best done at least an hour before you are going on air. Gives you time to summon help if needed. The day before may be better.

So what else do we need? Our notes that relate to our contribution. Best on paper and held in the correct order by a staple, treasury tag, or in a binder. If you must have them on screen, I very strongly recommend a second computer.

We should have water to hand. But should not be seen to be drinking it. A dry mouth is probably excessive adrenaline not thirst. Drinking water won't fix that. Speaking of which, do think about a quick visit to the loo.

Paper to write on and two working pens.

Finally, a professionally detached smile, not a big grin, to attach to your face.