By zsstevens Monday, May 04, 2020
Today's the day I expect to cross 250 miles of walking since the 17th March when, as a vulnerable person, I had to become socially isolated. It's the last day of the first seven weeks. The week Parliament might normally be expected to resume after summer recess would be week 25 for me.

Normally the weeks before that would be occupied by agricultural shows, with the Turriff Show, Scotland's second-biggest, being the highlight and only eleven miles away from home. No show this year.

The Traditional Boat Festival at Portsoy which started twenty or so years ago with an attendance of a few hundred and nowadays attracts tens of thousands from around the globe, cannot take place.

I won't be alone in feeling the loss. The occasional very wet summer has in the past curtailed these events with the loss of most of a year's income for the organisers. And they have survived. This year, having a planned cancellation many months ahead may reduce the outgoings in a year of little or no income. So these big, well-established events should live to delight us in another year.

But for many smaller events across Scotland, the blank sheet for 2020, presents the prospect of a more bleak future.

I suspect, however, that the enthusiasm and commitment of community volunteers, and an increased appetite for "sharing" events that must surely follow a period of social disconnect, may lead to a flourishing of local activity in 2021. I hear that there is serious thinking going on right now.

As summer next year is planned to be my first post-retirement season, I will be free from many of the commitments of public office. I will still be able to go the same shows, I hope!, and enjoy good craic with the same people, but be free to delegate to a new Parliamentarian most of the tasks that may arise.

The manner in which we may conduct next year's election has been briefly referred to in public discourse. Most brain-time has to remain on the immediate concerns of the current pandemic.

If it transpires that all votes to be cast next year have to be by post, I will welcome that. All the evidence is that if a postal vote is available, the voter is much more likely to be engaged in the democratic process. An increased turnout would be good.

One complaint heard by elected members not infrequently is, "We only see you at elections". Leaving aside the incongruity that one hears this when "out and about", at events, constituency surgeries and the like, it does touch on something important.

If we have an all-postal vote, how much contact between candidates and voters will there be? The local newspaper remains an important part of how the public hears of Parliamentarians' and Councillors' activity. But circulations are around a quarter of what they were when I first was elected in 2001.

Social media is full of relatively active and engaged people. But we need better rules for its use in our elections.

The thing I personally will miss most is our annual summer surgery tour. We have the plan waiting to put into action to visit about 40 communities with our mobile office as usual. But I doubt that I shall be out of lockdown in time. Shame, as it would have been my last summer tour.

I do continue to have brief exchanges " across the fence" with the people I see on my walks. Not a lot of people. A family of five, or was it six?, were out and about yesterday on their bicycles. Perfectly illustrating the younger members' enthusiasm for the outing, but not remembering the 2-metre distancing rule. I had to dash up the embankment to avoid them. Great to hear them chattering and dashing around with such energy. 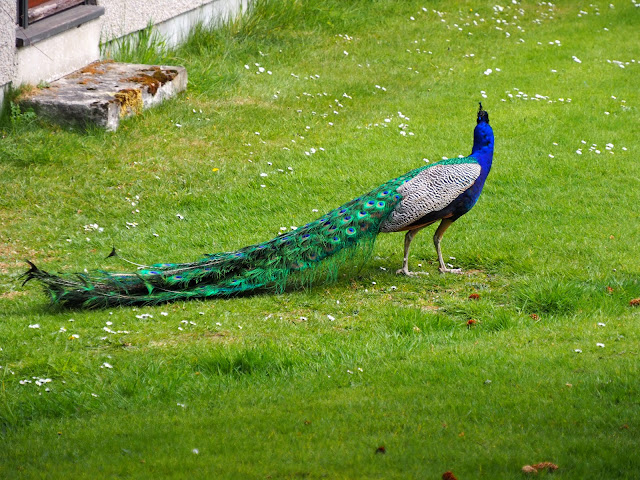 And not just people. We have from time to time been visited by a peacock. Not I venture to say, a native of Banffshire. Or of Scotland for that matter. I conjecture that it had come from a hotel about 3 miles away as the crow flies. I had considered that it might be difficult for peacocks to fly at all. But apparently, they can. Not far, though.

So I guess this peacock has wandered off on foot. I previously posted a blurry picture of one near us at home on our community Facebook page lest anyone was looking for him. No response. So I guess this bird is just looking after themselves as a feral local resident. Looks as if he's doing fine.

I had previously written about how well prepared we are for an extended period of isolation. But, and there's always a but, a shortcoming in our plans emerged in the last week. We have plenty of food, and proper storage in cupboards, fridge and freezer. We have a microwave cooker and an electric oven. The oil tank has fuel for water and house heating to last for many months.

The gas hobs upon which much of our cooking is done is another matter. Like much of rural Scotland, we are not, and have no prospect of being, connected to the gas distribution grid. The 73Kg cylinders of gas that feed our cooking efforts come on the back of a lorry when we need one. And that's about once a year.

Except that it transpires that for the time being, they don't. And one of our cylinders was empty, the other about one-third full. We don't normally reach for the phone when one empties itself; it takes a long time to empty the second. But in our planning, living with a limited supply of gas left? No.

So an unplanned visit down to the depot to collect a full cylinder. Thank goodness for the facemask. Its takes two to load it into the back of the car. They are heavy. Normal social distancing difficult.

Back at base, a bit of low cunning enabled me to get it into position without assistance. I haven't yet connected it. Our neighbour has a spanner of the correct dimensions; which he helpfully used to effect disconnection of the empty can. Now that we have enough gas on-site, there's no rush to connect it.

Adapting to the world of a pandemic involves a lot of quite big changes. And some quite unexpected small ones.

Except for a little bit more when I am out on today's walk.