By zsstevens Tuesday, May 12, 2020
This afternoon our Parliament will have its first hybrid debate where some members are present in the chamber, and others are participating electronically from elsewhere. The Subject? "Suppressing COVID: The Next Phase". I am among those scheduled to "dial-in".

In an earlier bit of writing, I discussed why we have telegraph poles to carry our telephone lines to many, mainly rural, homes and offices. The telegraph disappeared a long time ago.

Similarly, I, and others of my generation, talk about "taping" a tv program for later viewing. One would need to visit many homes to find a video recorder which uses tape. Mind you; ours would be one where you would find one. It's at the back of a cupboard sitting under a pile of VHS videotapes. Some of us are natural hoarders. I cling forlornly to the idea that I will need it so that I can transfer the content of these tapes to DVDs. Will I wait until these, in turn, are obsolete? I even have a Betamax tape some thirty years after the machine it was recorded on went to the dump.

That hoarding instinct might even be genetic. Some family bits of paper have survived centuries to reach my twenty-first-century hands. Simply because no one threw them out. The oldest is a statement of my Great-Great-Great Grandfather David Berry's service in the Royal Navy on HMS Medway. It is almost certainly a duplicate but was issued as long ago as 27th July 1817. 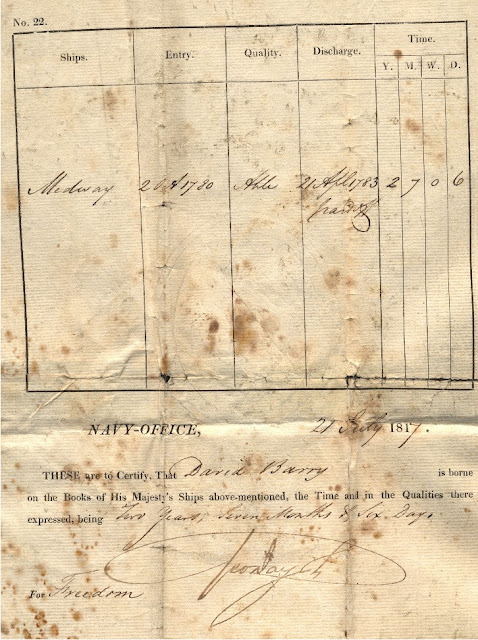 It shows that he served for two years, seven months and six days and was of the "Quality" of Able, meaning he was an able seaman, the first rank up from being an ordinary seaman. Had this piece of paper not survived to reach me I would not have travelled, a wee while ago now, to the UK's National Archive at Kew to read the ship's logs from voyages he was part of.

They provide a fascinating insight into a chapter in his life. And into the management structure and practices aboard the vessel upon which he served. They would be recognised by management consultants to this day as representing good practice. Most "new" business practices are merely old ones rediscovered.

One voyage saw them sailing from the West Indies to Chatham on the Medway in England. The had on board several hundred prisoners of war - French, Spanish and "American". This voyage took place in early 1782 and was thus just before the UK concluded that it had to settle with the American rebels. The "Americans" on board were not yet recognised as having that nationality. Peace and recognition finally came on 3rd September 1783 with the signing of the Treaty of Paris.

The voyage did not go well, although my ancestor must have done something right because the ship's log records that on 1st March 1782, and at the recorded age of 22 (he was actually 20), he was promoted to Able Seaman.

Strong winds had blown the ship well south of its planned course across the Atlantic and supplies were low. Short of water and down to two-thirds rations, they put into St Helena for replenishments.

Today it's not a big place and has a population of about 4,500. It was even smaller then. But the population rose by one as a result of HMS Medway's visit. One crew member deserted his post and was left there.

If people were to be asked today about St Helena, they might say that it's a very remote island, although few could describe where it is (it's more than a 1,000 Km west of Angola), and that Napoleon died there. The only occasion in modern times it may have touched our consciousness is via the very difficult and expensive (£250 million) construction of its airport which received its first commercial flight in 2017.

Life on board this navy ship in 1782 must have been pretty bleak if St Helena seemed a better option.

But then life for my ancestor on the farm in north-east Fife, to which he returned after his naval service, must have been pretty grim too if it seemed to be worse than serving in the navy in the eighteenth century.

Today St Helena has no COVID-19 and enforces a strict quarantine on any visitors.

So when I "dial-in" this afternoon, actually connect via the internet, will I be speaking about St Helena in my 792 word contribution to the debate? Doubtful. Because it mustn't represent what our future looks like.

Places that have done well through the pandemic did so partly through government action but more crucially because of social cohesion. Polling is consistently showing more support for Scotland's current approach to the disease than any political party has ever or is every likely to, achieve. That's a social consensus that is a differentiator we might look to build on.

Cohesion can be imposed, Singapore springs to mind, and can deliver sufficient benefits, for a while at least, so as not to provoke significant push-back from the population. But their economic success has not created one view of their future. And internationally it is near the bottom of league tables on human rights.

We shall see how this afternoon's debate goes. I suspect there may be a shared view that our post-pandemic country will not be like it was before COVID-19. But there will likely be divergent views of "what next?".

On the 16th of May 1915, the Immature Spirits (Restriction) Act was passed. Lloyd George, the "Welsh Wizard", who would be Chancellor of the Exchequer for six more days before becoming Prime Minister was in charge of the Bill. The main clause in this two page Act reads;

"1. (1) No British or foreign spirits shall be delivered for home consumption unless they have been warehoused for a period of at least three years"

The purpose of this Act was one thing, to tackle drunkenness which was affecting the manufacture of armaments. The example of US prohibition had been Lloyd George's first preference, but fortunately, he was talked out of it. The warehousing was intended to restrict supply during the war. But had a much more important long-term effect.

By eliminating poor quality whisky from the market, it established our Scotch product as one of impeccable quality and lifted world-wide perception of it to the premier league status it retains to this day. It also needed strong marketing to enable us to capitalise on that. And strong branding too.

Scotland can produce little that will beat the world on price. But a great deal that derives from our ingenuity and intellect and rests on our reputation as a source of quality products. Whisky still being one of them.

So as we move to a post-COVID world, where is the next "whisky" and what actions can legislators take that will enable, or at least avoid inhibiting, other successors that will, like whisky, be a source of pride, jobs and income in a hundred years?

Will this afternoon's Parliamentary session help? It can start that debate as well as discussing the immediate issues.