Recording the world around us

By zsstevens Tuesday, May 05, 2020
That's a full seven weeks of social isolation completed. And we're both still well. And the first 250 miles of walking exercise completed.

Fitness is clearly not an antidote to an infection. Indeed a top athlete who catches a cold is laid low by something that simply makes the rest of sniffle and sneeze while still going on pretty much as usual. But the fitter you go into illness, the greater reserves one has to fight any bug that alights upon one.

And with physical fitness goes mental health and an immune system alert and ready to respond.

Just as my first four week's of walking all topped out in the low thirty miles of exercise, the last three have been in the forties. Positive adaptation. Just as each day we hear of further adaptations to health advice and public policies as we understand better what this disease is about.

Familiarity with something that's dominated our media could be dangerous. It's not rational, but it is normal, to feel that the longer a danger avoids hitting us personally, the less chance there is that it will. That's wrong.

The reality is that the risk may be greater. There are more people infected than there were seven weeks ago. The R0 number hovers around, or perhaps is a little lower than one. We've been told, correctly, that when it's one, it means that an infected person passes the bug onto one other person. And when it's zero point five, they only infect half that number of people. Yes, I haven't met a half-person either, but you know what's meant.

All our efforts have been directed at reducing the number of people we get close enough to allow the bug to jump across from an infected person. It's working. Each little adaptation has made a contribution to reducing and driving the R0 number down. Equally any refinements that allow more contact between people "spend" some of those carefully won savings. So we need to chose when and how to use these gains carefully.

How to think about all this? Here's the formula that tells us how many new infections there will be in 3 months' time. Hang onto your hats, I'll turn this into English shortly. Actually, you have to add up the new cases to the existing cases and subtract those no longer infected. But we'll ignore that to make it simple.

Or look at it this way instead. If R0 goes up by 0.1, the number of people infected trebles over three months. If it goes down by 0.1, it drops to a fifth or even less.

If an infected person would have met ten people and infected one of them and now meets one more, eleven, the number of people infected trebles. That sobers you up when you think about meeting up with chums, doesn't it?

In Scotland, we started to be infected later than in London. That's just about the journey the bug made. It took a while for it to travel up the A1. So we know that it will still be with us after it's starting to run out of puff in London. When we do anything that increases our contact with other people, we increase the number of people who get infected. Simples.

Are you tired out by numbers yet? Because the other important thing is how we, and those we meet, behave when we meet. We still need to buy food for example. Or we need support because of age or infirmity.

So hand-washing matters. It removes bugs from the part of us most likely to touch things - shop baskets and trolleys spring to mind - that other people will also be touching. And face-masks can help a wee bit. Wearing them reminds us to be careful and keeps some of the bugs away from our lungs.

After seven weeks, one personal loss had begun to affect me. I had left my camera kit in Edinburgh. I started to develop my own photos when I was about ten and have maintained an enthusiasm for photography to this day. Here's a photo I took sixty years or so ago of Patsy, the ginger cat my siblings and I shared our youth with. 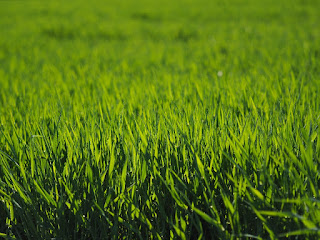 I have a camera, as most of us will, on my phone. So I have not been entirely camera-less. But my "proper kit" enables composition in a way that the phone doesn't. Look at how depth-of-field transforms a photo of a field of barley into something almost abstract and engaging.

So I took the plunge and bought a new camera. Incidentally, it tells its own story of how the world has changed in recent years. Turn it over, and I discover it was made in Vietnam. That photo of the barley was part of my learning how to use my new gadget.

Like all cameras, it enables a more straightforward recording of the world around me. On my country walk, I found a home-made poster stuck to a telegraph pole at the roadside. The nearest house would be at least 300 metres away. Careful scrutiny reveals that the artist is "Zak" and that it was created in 2020. Good artistic practice to sign your work. 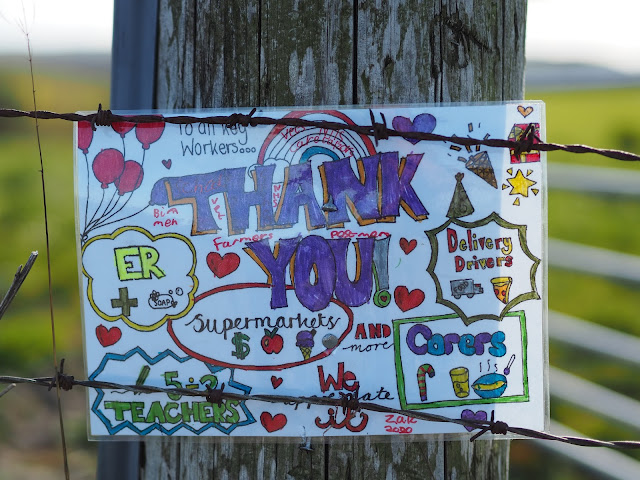 But it captures the essence of the debt we all owe to the front-line workers still out there meeting our essential needs while we exercise social distancing.

Zak has pinpointed NHS workers, carers, posties, delivery drivers. supermarket workers, teachers, farmers, bin men, vets as being among those we would should respect in these difficult time.

Spot on. They've helped us and helped keep our R0 heading downwards.

I won't welcome any increase in social contact if it drives that number back up.

None of us should.