For offices, Friday is traditionally a day of relief; the end of the working week. But in these much changed times, for many, this distinction is much harder to make.

I had an online meeting on Thursday, one of eight this week, with my goddaughter. We discussed outdoor games that could be played with her contemporaries at some point in the future that maintained that vital 2 metres apart rule which prevents the virus from jumping the gap between people.

Hopscotch was first out of the pack. It's quite remarkable that in the modern world, dominated by electronics, a game that appears to have existed 2,000 years ago in Roman times survives to this day. Indeed a couple of weeks ago Edinburgh's Evening News reported that a 300-metre long hopscotch had grown organically in one of our capital's streets.

A bit of tarmac and some chalk seems to have an enduring fascination.

But in the countryside, we too are using the tarmac in ways the council's road engineers had not anticipated. On one of my walking routes, a family of children, at least I assume it's the children, have painted on the road a bit of the history of the effects of this nasty virus. Not a medical report. A social report. Unlike Edinburgh's chalk hopscotch, this record will survive the rain and be worn away rather gently by the very occasional vehicle that uses this bit of the public highway (highway? it's actually about nine feet wide, a single lane).

Hopscotch is actually a competitive game with the Guinness Book of World Records reporting that the holder of the record for the fastest hopscotch game as Ashrita Furman, at 1 minute and 8 seconds.

Now how they work that one out, I don't know. There appears to be no organisation beyond the street which is responsible for designing a standard layout and publishing rules for the game. This is a real grass-roots "sport". And a real survivor.

We discussed hoopla. If each player brings their own hoops, we could probably play the game in a way that prevents cross-infection.

The bottom line is that we were discussing the future. Her's as an eight-year-old likely to be somewhat longer than mine as an 8th decader.

For some time, actually years, she has been gently pushing her parents for a pet or pets. For the next few weeks, they will have a dog, quite a large dog apparently, staying with them in their modestly-sized home. Concomitant with that is the need for exercise, dog walks. Good.

Beyond the dog, the addition of a couple of gerbils to the home has been agreed, she tells me. As mum was sitting in on this part of the call, it may represent a family decision, not just my goddaughter's aspiration. It goes further than that. Names have been chosen.

One escapes my memory, and the other is Nero. Yup, the notorious Roman emperor of that name. So memorably played by the late Peter Ustinov in Quo Vadis". His autobiography sits on our bookshelf, entitled "Dear Me". Indeed.

Comprehensive research into Nero's activities has been conducted, one assumes using the modern equivalent of the Encyclopedia Brittanica - the Internet, had some role in this. She showed me a storyboard which she had constructed, which recorded the more ghoulish activities he conducted.

Mother killed. And many other brutal acts committed by him or on his orders. But was he as bad as history recounts? With the passage of 2,000 years, we will never know. His reputation certainly sullied by his enemies' writings.

So in future, I shall watch the activities of the gerbil Nero with interest. Names can drive behaviours.

The bottom line is that it is good to think about the future.

A group of us with rather less time in prospect, foregathered at 1900 hours yesterday evening, the "Escape Committee". During the war, prisoners held by the Germans were encouraged to organise themselves. In doing so, it was expected that military rank would be respected.

This gave the Germans a clear structure through which they could communicate with their prisoners.

But not all were content with incarceration and had a committee not so encouraged or authorised, the "Escape Committee". Its purpose was both to make life hard for the Germans and to facilitate escape from the camp.

As a child on holiday, our caravan used to park near another, where the man of the family had been a prisoner-of-war in a German camp. He was long and lanky and had been a tunneller working as part of the escape committee infrastructure in his camp.

One would not imagine that this particular skill would particularly complement his profession as a doctor in civilian life. But for the children who were camping at Achmelvich with their parents, his tunnelling skills were in demand.

We had found a large pile of old planks on the hill above the beach. And with his help, we used them to construct a network of prisoner-of-war escape tunnels through the sand dunes. And at the end of the season, we carefully sealed up the tunnels, encased a visitors' book in polythene pinned to a piece of wood with a greeting burned onto it.

Each year we returned, re-activated our tunnel network and worked on extensions. Wonderful! Safe? Less certain. I am sure no one estimated the weight of sand above our heads or calculated the effects on anyone trapped beneath a roof-fall. Carefree days. 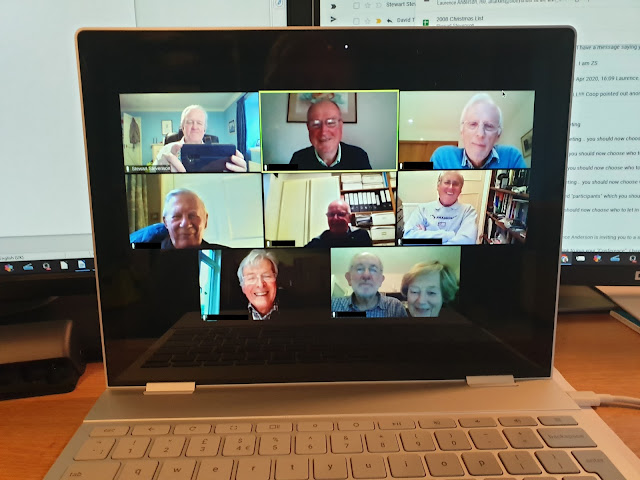 Our modern "Escape Committee" reflects the joy of escape, not the weight of incarceration. There is no organisation. Last night's initial attempts to get our ZOOM meeting going, truly reflected that. But we are lead willingly by one of our number whose organisational skills have been maintained, to some extent or at least more than the rest of us, since we all retired some twenty years ago from the "computery" bit of the Bank of Scotland.

Parenthetically, I should emphasise, we left before the takeover by Halifax which led to our Chief Executive being someone with no meaningful banking experience. The inevitable downfall of the organisation was thus "baked in". The previous presbyterian caution was replaced by the free-wheeling leadership of a marketeer. Not good.

And speaking of "free-wheeling", our social get together operates without rules, and without leadership. And works. Isn't it precisely the joy of a team night out. Shouting across the table. Insulting the absent, and a few of the present. The only rule is that everyone must have a glass of "something" in their hand just as would be the case if we were physically together rather than being clustered on a PC screen.

We can still do Friday nights out in the virtual world.

Although previously our "Friday night" was always a Thursday.

How did that happen?