By zsstevens Sunday, May 24, 2020
Using Your Microsoft Surface for video-online

The Surface is a pretty superior machine in many respects but there is one thing it will not do unaided - sit perfectly vertical while you use the camera for video broadcasting.

Note the use of the word "unaided". To fix any device which has no hinge, that would be a "Surface", an "iPad" or similar, in the vertical position requires three things. And a bit of "barefoot" engineering. Frightened? Don't be.

You need a hand towel of reasonable quality. Four relatively big hardback books - all the same height. And three medium-to-large clothes-pegs. Large bulldog clips might be even better. Oh, and the fourth of the three things, is a table which is at least twice the fore and aft width of two Surfaces etc. at which you can comfortably sit. 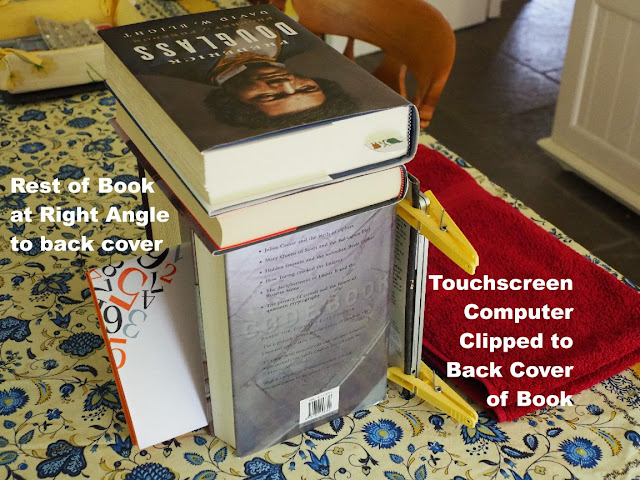 Your hand towel should be laid from the edge of the table in front of you, preferably folded over to be reasonably thick. This is the landing area, the safety net, onto which your machine will collapse uninjured if your engineering skills prove not to be up to the job.

Then assemble the harness that will hold your computer vertical. Start with your biggest book vertical and with its spine towards you. Pull the rear cover towards you, Put another free-standing book behind and a couple of books on top.

Now clip the touchscreen computer to the rear of the first book.

Your Line to the Exchange

There are lots of bits of wire of varying age and quality between your computer and the telephone exchange where you connect to the rest of the data world. And lots of processing of your data en route to the video-online service you are using.

So what? Can you make all that work better when it's someone else's gubbins? Maybe you can.

If you are one of the 95% of Scottish households which can be connected to a fibre network, you should. Nothing else will make as much difference.

If like us, you can only be on copper cable you are (almost certainly) using ADSL 2+ technology and are probably at least 3,000 metres from your exchange. Your theoretical download speed is now a maximum of one million characters per second (8 Megabits) and that vital speed for your video being sent to others is just under 62,500 characters per second (0.5 Mbps). When you are 5,000 metres away, the speeds drop to about one fifth of that (see https://en.wikipedia.org/wiki/Asymmetric_digital_subscriber_line if you want tables and more techie stuff - masochist!).

But we are doing much better than the tables predict. Why?

Our speed used to be very, very, very slow. And I noticed that it dropped dramatically when it rained. That's a clear sign of water getting into a junction somewhere on the line. The nice person from OpenReach arrived and with their trusty ladder checked successive junction boxes on the telegraph poles. They replaced two, one two poles away, the other seven. Our line speed quadrupled at once. You see how messy these are. This is ours.

If your speed is significantly less than the tables say it should be, or your Internet Service Provider says you should get, get your line inspected. Insist. Any poor physical connection on your line will hit your speed.

But first, look at how the wires in your house might be a problem.

Speeding up Your House

The wiring in your house is of dramatically lower quality than the stuff outside. That's why you plug your modem, hub, interface box (various names for the same thing) into the "master socket". That's the one your outside line comes directly to. Means you are using little of your domestic wiring.

That socket you are plugged into has probably been there a while. £10 replaced ours with a new one with two outlets. Our speed doubled. And Mr OpenReach recommended it and did it. Took two minutes. Wiring is a bit complicated for the amateur however.

Switch off the ringer on all your phones. You know why.