A future for farmers and fishermen 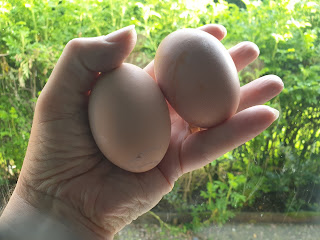 Staring back at me as I make my tea this morning are the monster eggs I spoke about getting from our neighbour a couple of days ago.

So big are they that they cannot fit in a standard egg box. Driven to bring the scales out and weigh them, I discover that two together are more than most supermarket fillet steaks—nearly 200 grams.

An omelette from them would be a substantial meal.

It's one of the curses of the modern world that everything seems to be driven towards standards that are merely cosmetic or economic. These poor orphan eggs, from hens working for supermarkets, have been excluded from their destiny by their size.

Over the last year, I have attended many meetings with local farmers. And one topic that has been exercising them in this prime beef-producing area has been a reduction in the weight of cattle that the big store chains want to buy.

The stores want the steaks on their shelves to cost under £10. Apparently, that's the point at which the customer thinks the product crosses from "affordable" to "expensive". Thus the steaks need to small. And to make them small, the animals too need to shrink.

That means a big shrinkage in the profit margin for farmers.

The average earnings for many, if you take the hours worked into consideration, are close to the minimum wage. Yes, there are some huge landowners that are in a different league.

Today's reading will focus on my preparing for a hectic day on Wednesday. The afternoon is essentially cranking up the penalties for wildlife crime although some MSPs are lobbing unannounced and untested provisions on other matters into the Bill we shall be debating then.

But the morning's work is vital for the future of farming and our farmers. As a society, we support agricultural activity because of the many benefits that we gain by doing so. Until now, the main framework for that has been the Common Agricultural Policy of the EU.

But for 2021 and beyond we need our own scheme in place. And there's not much time to pass the law we need. We've got forty-five proposed amendments to the Agriculture (Retained EU Law and Data) (Scotland) Bill to consider tomorrow morning.

Some are sensible, and not all such come from the Government, but others would make it all but impossible to deliver the detail of new scheme in time for farmers to finalise their plans for next year. The 31st of December won't do.

Once again, I will be multi-tasking on Wednesday morning. While the left ear and computer on that side of my desk will enable me to join the consideration of, and voting on, the amendments I just talked about, that's only half my work.

The right ear and computer on that side of me will be tuned in to the COVID-19 Committee. And one of the witnesses from whom we shall be taking evidence is the estimable Clare Slipper of the National Farmers' Union of Scotland. So it will be farming to the left of me and farming to the right of me, farming all around me.

With supply chains for food, as for many other imported goods, creaking along rather less effectively under the weight of the pandemic which is affecting every corner of the globe, the importance of home-grown food is greater than ever.

But farmers don't just deliver food for us. They create and maintain the countryside which is all around us. Stand on any small hill in the country and look in every direction. All is the work of man. And apart from the roads, almost all is down to farmers.

And modern technology depends on them too. With coal now all but removed from our generation of electricity, a huge proportion of what powers the computer I am using now, and so much more domestic and industrial, is powered by the turbines on farmers' land.

The mobile phones which we take for granted depend on their being enough masts around to catch and relay our voices and data. The majority of the square miles in Scotland where a signal is available probably comes from a communications tower on farmland.

While these are new, and financially helpful, "crops", they are not something every farmer can harvest. So getting the legal framework for a new support regime in place soon is vital.

Other Committees are also wrestling with the COVID world we currently live in. And the unknown one to follow. The doctrinaire plan from Westminster to press on with another major disrupter to our economy, Brexit, in a timetable set long before the pandemic moved centre stage, hardly seems wise.

The owners, in the North East and beyond, of fishing vessels and the crews who share in the profits have long looked forward to increasing their catches after we leave the Common Fisheries Policy. Over 60% of fish caught in our waters are by foreign vessels. I led a debate in Parliament on the Scottish Fishermen's Federation's "Sea of Opportunity" in January 2017.

More than three years later, the future prospects may not be so clear cut. I warned of some difficulties to come in my speech in my debate when I said:

"For our processing sector, there are both opportunities and risks. Last week’s report of increased losses at Shetland Catch, largely due to the closure of the Russian market, shows the dangers of any restriction of access to markets."

Our processors, an industry a bit bigger than the catching sector, are now quite strident about the loss of markets and the increased costs and complexity in accessing those that will remain.

And the catchers are being caught in administrative straight-jackets too. For example, every vessel will require to be inspected and licenced as a food producer.

They will, of course, almost all well meet the required standards already. But are there enough inspectors to allow this to happen on time. A modest but non-trivial challenge for fishermen.

Catching more fish will mean nothing if markets shrink and prices collapse. The pandemic has already diverted fish away from consumers to cold stores. They are now all but full.

We have warm words from UK Ministers about protecting the catching sector. But will that be enough?

Pessimists prepare for an uncertain future. Optimists ignore it.

As we move forward this week and beyond in securing the best possible future for our farmers, our attention will need also need to be on fishing.

I am a natural pessimist.

Too many remain optimists.