No pigtail after all

By zsstevens Sunday, June 28, 2020
For the first Saturday in a normal recess, it would be routine to report that nothing had happened. But not so.

The post-session recovery that generally occupies the first few days has yet to start. And indeed, is required more than usual. Since being elected nineteen years ago, I have had no May and June months with as many Parliamentary Committee meetings. A bit less speaking in the Chamber certainly, but it's Committee work that takes the real effort.

In this past week, it has been well over three hundred pages of briefings to read. And to understand.

There are those, not merely people who hope for a remunerated retirement to what Jim Hacker of TV series "Yes Minister" referred to as a home for vegetables-otherwise known as the House of Lords, who regret our not having a second house for our Parliament. Worth noting that over two-thirds of the world's legislatures are single Chamber like us. And a large part of those that do, only have one because ex-colonies copied Westminster.

I, and my political colleagues, are not among those who seek a place on the red benches at Westminster. When a party who can only achieve the support of the electorate to gain eleven MPs has ninety adherents in the House of Lords, you know something is rotten in UK politics. And not a single one of the ninety can be ejected by the citizens. Only the most critical malfeasance sees them removed from their lifetime sinecure.

Now for one part of our population, and I don't mean the Lords, this is good news. Who? The most committed of Brexiteers. This because the test of democracy is that the citizens can dismiss (at least the majority of) their legislators. In the UK most state legislators are appointed for life. We have no say. The EU requires an applicant country to be a democracy. The existence of the Lords means the UK isn't. Brexit is thus secure.

The Committees are the place where we revise. In each of the three Committees on which sit, we have undertaken a Stage 2 revision of proposed legislation in the last few months. One of the reasons I have been so busy.

Back at base in the constituency too, the complexities of coming out of lockdown, carefully, are keeping us occupied.

I did, however, find time to walk six miles on the first day of recess. It was ideal walking weather, warm but not hot, with a modest breeze above. And the excellent paths of Auchinderran Walks beneath my feet.

I bumped into a couple on my walk. I had paused to do a little piece to camera for a second YouTube on the walks. I must have allowed their arrival to distract me. The results had sound so inadequate as to make it unusable. Another day, another day.

But I am glad that Mr & Mrs Greig caught up with me. We had a long gossip. And to good effect.

It turned out that I should direct much of my gratitude for the new "Walks" to them. He built them and provided much of the land. He called it "putting a bit back". Local farmers keep our rural communities alive by their efforts. But this one deserves our especial thanks. 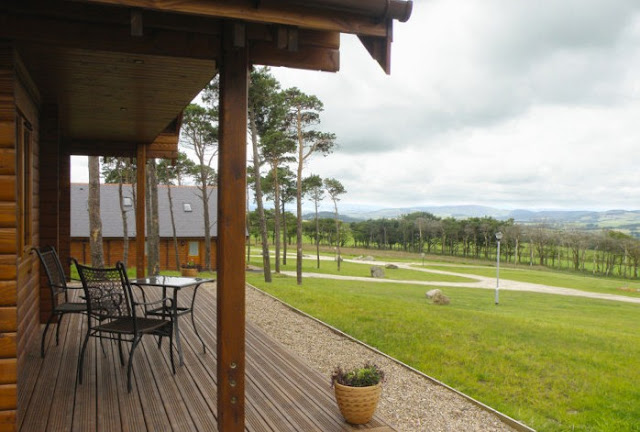 It turned out that his family have an interest in holiday lodges at Hill Of Maunderlea, which is within my normal walking radius. I had been there for their opening about ten years ago. And as the picture demonstrates, they are in a bonny setting.

More to the point, Mr Greig reported a flood of interest this week in renting them. A Banffshire contribution to what should be an enjoyable and relaxing staycation for many.

Maybe herself and I shall discuss our own plans later today.

In a few hours, I shall be engaging with god-daughter Darcey courtesy of Mr Zoom. Perhaps she will have useful advice. I think her mind may also be turning in that direction. I recently found a phone video of her happily consuming ice cream in Portsoy with us when she was about two years old. She will be nine shortly.

I may give her the opportunity in years to come to "shield" her from its wider distribution during her teenage years. What price should I extract? I, on the other hand, no longer care about the photographic record of my pre-school years. Indeed I am still hunting down bits of it.

The next three days only have a couple of formal appointments. So it may, at last, be possible for me to get control of my diary between now and my planned retirement as an MSP in Spring 2021.

As a real sign of progress, for the personal me that is, I have a booking for a haircut in about a month's time. The hair's been beginning to annoy me a bit. Heavy on the collar but not yet long enough for a pigtail.

Maybe a wee bit more techie checking of my video setup before I set out for today's walk.

Drat. The rain's on. Not yesterday's thunderclaps that cut power for 16 seconds at 0644. Or so my computer's uninterruptable power supply reports to me. But heavy enough to divert me to the rowing machine.

If not yet wholly forgiving of the process of making her so.