No recess for the wicked

By zsstevens Friday, June 05, 2020
I can almost measure the time of year by the interactions with students. Today is the second one this week. There's a lot of dissertations to be completed before summer.

The subjects can be quite varied. So can my reaction to them. But what is a constant is that I learn something from each and every such interview.

This afternoon is a round table discussion with the National Farmers Union of Scotland. They are a regular feature of a parliamentarians' life in the North East. The ever-energetic Lorna Paterson who is employed as the "sheepdog" for our local farmers has not let our inability to meet in person get in the way of our chewing the fact about current issues.

With our rural shows cancelled this year today's online session will help keep us up to date with matters agricultural. I normally have surgeries in our caravan office on both days of the Turra show at the beginning of August. And the NFUS always organise a meeting in their tent there with at least one Government Minister to answer for their sins.

Not happening this year. And neither are the New Deer, Keith or Black Isle shows. The multiplicity of stalls, including my own political colleagues' fund-raising bottle stall, show the diverse nature of activities and interests in our rural communities.

I won't be popping in for tea and biscuits with the Federation of Small Businesses. Nor be invited into Scottish Land & Estates tent. Is that one where I have to politely turn down the offer of something stronger because I am driving? And my pals at the Scottish Tenant Farmers Association will miss sitting with me as we have a relaxing chat under our hats to keep the sunburn at bay.

Quite a different last summer as a Parliamentarian than I had envisaged as we conducted our "wash-up" discussions after the 2019 season of meetings, shows and caravan surgeries in about forty communities, and looked forward to this year.

Parliament will continue, at a reduced intensity, until the end of July. And then resume on 11th August. Schools will restart on that day, for students and MSPs. Essentially there will be no recess.

Not that recess was ever a holiday, despite the teasing remarks of many. It was instead a time of outreach, discussion and knowledge extension.

Indeed, my spouse and I have not been able to find more than an eight-day stretch for taking a vacation for many years.

Last year we celebrated 50 years since marrying and took our first cruise. Herself has always been reluctant to be shut in one place with an unvarying group of people. In the event, it worked out well in that regard. Although predictably, we were not long on board before being recognised.

We got married at Bona Church on the shores of Loch Ness, about six hundred metres from her home. But not on the day originally planned. 1st August was a Friday and an easier day to remember but less convenient than Saturday the second might have been for others who attended.

The hotel originally booked for the reception contacted us about six or seven months before that date. They advised that they could no longer be sure that major building works would be complete in time. We had to look elsewhere. And that meant a change of date.

Friday was horizon to horizon blue sky and hot, very hot. But just as well that it was Friday.

The Saturday happened to be the day that the Round Britain Powerboat Race departed Inverness on the leg to Dundee. That was a day of fog and then torrential thunderstorms. I don't imagine many enjoyed either spectating or driving a boat in those conditions. Some of our guests were still celebrating but as they were shut inside it did bother them. A Highland wedding! But most will have been relieved to have missed the storm.

We did. We had caught the last train to Aberdeen having snuck away from the reception. You couldn't trust my new spouse's relatives not to wreak havoc on the departing couple. And indeed, en route we had cause for concern.

It was "corridor train" with six-seat compartments and a door to enter each. The train was not busy. We were able to find one to ourselves. We pulled the blinds down so that passers-by in the corridor could not see in.

But when we stopped at Elgin, the sound of rushing feet could be heard, the door was yanked open, and a note thrust in. The messenger departed as rapidly and noisily as they had arrived.

Examination of the missive suggested it might be correctly addressed. Worrying. Had our travel plans been rumbled?

Our late arrival at the Northern Hotel in Aberdeen heightened our alarm. When we signed in to their visitors' book, the previous name appeared to be ours. It wasn't. There was another couple similarly named and, on further reading, we concluded the message was not for us.

Earlier in my diary writings, I have written about our flight to Stavanger. It, of course, was a means to an end. We spent a happy ten days in Haugesund, Norway. And so when we went cruising last year for the first time, it was to return to Norway.

It had one particular similarity to our 1969 vacation. It was hot. We had chosen Norway back then precisely because neither of us much enjoy too much heat. But fifty years ago, our Scandanavian neighbour had the hottest summer for half a century.

Our second joint visit, I had been there on business alone on a number of occasions, returned us to the intense heat of our honeymoon—another record-breaking year for Norway's summer weather.

Much as we had enjoyed last year's cruise, we had not planned, insofar as we'd discussed it all, a holiday away from Scotland this year. I had tentatively broached returning to Plockton, am Ploc is the Gaelic, where renting a house and taking our feline tribe adds up to a relaxing week without much travel hassle.

It's not a big place, but it's well equipped for visitors and permanent residents alike. It has a harbour and lots of leisure craft. It's on the railway network. Many of the stops from Inverness are request stops. A comfortable, leisurely journey. And an airport. Well, perhaps an airstrip. But it does have tarmac and quite a bit of space for aircraft parking. 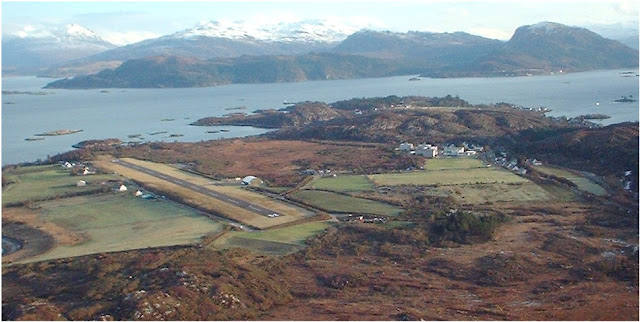 The direction of the runway is not perfectly aligned with the prevailing wind but is instead determined by terrain. Indeed if taking off to the south (that's RWY 20 for you pilots), a fairly quick right turn helps you avoid the hill.

Arriving has its interest too. Quite high trees are at the end of that same runway, and an oblique approach is recommended to avoid them. Which adds to the care and attention one will wish to take to ensure that one's ground speed is zero before you reach the end of its 597 metres. (detail at https://ukga.com/airfield/plockton)

But for the time being, thoughts of vacation have to be on hold.

And because there is no real Parliamentary recess this year.