By zsstevens Thursday, June 25, 2020
For the first time in several months, I was able to fit in an hour of family tree research. That came after my breakfast, porridge and local strawberries, reading the papers and now sitting down to write up my daily diary.

The prompt for today's research was an email from one of the family tree databases to which I subscribe. Yesterday was even more exciting. A DNA match with the same name as one of my Parliamentary colleagues.

While it would be a breach of privacy to be specific, the name only occurs twice in Scotland's birth records since modern records started in 1855. And in world-wide records only a further two. The person whose DNA I match has provided no information apart from their name so I shall need to see what response I get to my email.

But back to this morning's research.

That involved the main criminal in my family tree. You've always suspected ... ? Don't get too excited as I share no DNA with this person. Their family married into mine. Mind you, I have made various references to my relatives in Parliament. When you have 13,000 people documented in your tree, I started work on it nearly sixty years ago, there's plenty of scope to do so. There may well be other crims in there.

There is risk in going public. It drove Bill Aitken MSP to respond in some frustration in debate that; "Stewart Stevenson is a very special person. He can trace his ancestry all the way back to his mother." Work it out. I laughed out loud. Its being Bill, it was humour, not cruelty. Something he was quite good at.

My criminal, John McFeat, and the records of his crimes are interesting. There was nothing clever about this 17-year-old's crimes which were committed overnight on 29th August 1830 at 35 Leith Walk.

He broke into a house where the front room was a bar. He stole a bottle of whiskey and a coat. Yes, it is consistently described by various records associated with this case as "whiskey"; with an "e". It seems that the modern spelling of our national drink, "whisky", sans "e", postdates this period.

The precognitions obtained by the Procurator Fiscal Archibald Scott might seem extensive for what we might consider a comparatively minor crime today. They run to over a hundred pages.

Interestingly they show some of the opportunist nature of the crime. The shop from which the theft took place was his father's neighbour. Young John had left home about a fortnight earlier to stay with some other young people. The constraints of his father's discipline were bearing too heavily down upon him. That might relate to his having taken up with a young lady not well thought of by his parent.

Father's concerns seem to have been justified.

John and others were on Calton Hill, our Parliamentarians can gaze out on the very spot that was the genesis of this tale, on a Tuesday night in August 1830. The precognitions, of which there are nearly twenty, paint a picture of a group of youngsters larking about of an evening. Someone says it's a pity we don't have anything to drink. And up pipes young Mcfeat to say he knows where he can get some.

One can imagine not dissimilar gavottes at the same location today. Two hundred years later it remains a gathering place for frolicking.

Of the charges ultimately brought by far the most serious was the housebreaking. The two thefts were considered much less serious. In fact, no breaking was actually required. A back window was not fastened, and entry required no force.

The taking of the coat does not seem to have been part of the original idea. Subsequently, it was "fenced" through a lady with a second-hand shop in Leith Wynd. At that time the wynd connected the Canongate to Leith Walk. The building of Waverly Stations, yes it was initially the collective name for several different railway companies' stations, meant it was gone by 1850 or so. Today's Jeffrey Street connects to the High Street at about the same place as Leith Wynd did.

The coat was John McFeat's undoing. The fence did not have enough money to pay the agreed sum for the coat. McFeat had to return for his sixpence the next day. The town Constables awaited him.

I judge from reading the files that the fence spun a tale of innocence. She knew the lad came from a "good" family and believed that it was his father's surplus coat. She was careful not to put these words into anyone's mouth, least of all the accused, but merely put them forward as justification for the purchase. She successfully persuaded them that she had no intent to buy stolen goods.

That was a bit of a stretch as she was "known" to the Constables. Indeed, for that reason, she was one their early visits during their hunt for the stolen coat. But I guess that the end of the day, they had "got their man" and left her alone on the basis they catch her for something else another day. Speculation on my part, but that's how I read the sub-text.

The Tollbooth in Edinburgh had another prisoner. The High Court of Justiciary sat in Edinburgh on the 10th and 11th of November and John appeared on the second day. The jury was selected from 45 good citizens from as far away as Haddington and wasted no time.

Indeed over the two-day sitting, fourteen accused appeared in twelve trials. One was acquitted. All the rest were found guilty and were sentenced to transportation—most for seven years, some recidivists for fourteen. You were allowed back after that period but had to pay for your own journey. Few did; and John wasn't one of them.

After a few months in the Tollbooth, he found himself on a prison hulk moored at Chatham on the Medway in Kent.

For the family tree researcher, there is a huge advantage in finding a criminal, a politician or a peer. So much more is known about them.

John was prisoner 866 on the hulks. The notes in the records from there say:

I think we can take it that he was not yet reconciled to his fate.

On 25th January 1832, he was embarked on the John 3 for Australia under the command of Captain Lowe. He may not have realised it, but he was relatively fortunate compared to previous generations of transportees. 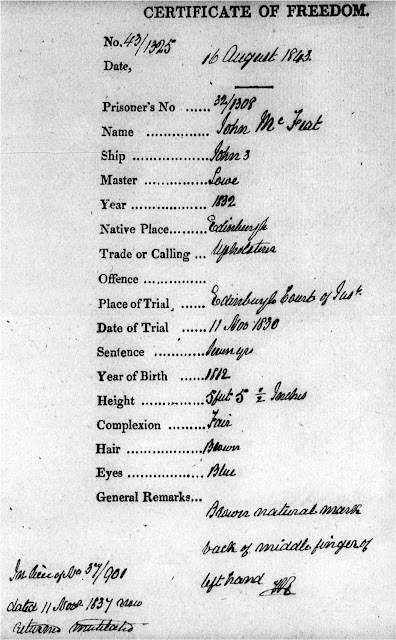 Many prisoners died en route to their fate. But by 1832 the Master of the vessel was only paid for the prisoners who arrived alive. Only one died on that voyage. The embarkation records show that John was now 20, sentenced to 7 years and with no previous convictions. He is five feet four and three-quarter inches tall, has a fair, ruddy complexion, no distinguishing marks, with brown hair, and blue to grey eyes.

On arrival in New South Wales, most fellow convicts left at Van Diemen's Land (Tasmania), he was hired out to Thomas Roberts. You don't think they were just dumped there did you? It was an expensive business sending your convicts to the other side of the world, and the Government was desperate to make a profit.

He served his time without further offence and was discharged on schedule on 11th November 1837.

Over the ten years, until he died, he fathered three children with a convict from Cork in Ireland. The over one hundred descendants I have found so far, live there to this day—solid and upright citizens.

So I am looking forward to the re-opening of Register House. I have far from finished rummaging through their information.

I am hoping for records about people with such well-recorded lives.

But through honest endeavour.