By zsstevens Sunday, June 07, 2020
The Parliament's meeting on Thursday the 17th of May 2007 finished at 11:52. The business of the day was straightforward. It had started at 11:15 and had two decisions to make. The was first to appoint (formally, recommend to the Queen) what we now describe as Cabinet Secretaries. They are appointed under Section 47 of the Scotland Act 1998.

The second was to appoint what we now describe as Ministers under Section 49 of that. All the words in Section 47 also appear in 49.

Just to provoke, although you should check my view with the authors, opposition members tabled amendments to the motions to appoint. In the Tories' case, to delete Richard Lochhead from those who would be appointed as a Cabinet Secretary. And from the Liberal Democrats a desire to remove John Swinney from the list.

After a ritual debate, both the authors of the amendments sought to permission to withdraw their amendments. One member objected to that. So we voted. By 11:52 we had a new team of Cabinet Secretaries and Ministers.

This was not much of a surprise to me, or any of the rest of the team. In my case, I had been invited to attend room M1.03 in the Parliament's block of offices for MSPs at 17:30 two days earlier. I had thought it was just a routine meeting our leader was having with each of us in the SNP group post-election. But no, it was to invite me to Minister for Transport, Infrastructure and Climate Change.

So at 14:00, after the Parliamentary vote, I walked from Holyrood up to St Andrews House, the Government's main office. Being the new, and the first-ever, Climate Change Minister, I had persuaded most of my colleagues to join the walk rather than use a Ministerial car. Only three Ministers had been named in the earlier debate. Tavish Scott, whose job I was now taking over, had added to the two named in amendments by saying:

and I wanted us to start as we should continue.

We were there to meet our staff at 14:30. I say "our" staff, but these were civil servants whose job it is to smooth the path between Ministers and the very large group of officials across Government who would be working for us, and with us, to implement our policies.

But equally important was their role in inculcating us into the ways of being a Minister. I was introduced to my Private Secretary. Having no prior expectations, it came as no surprise that held in her left hand was a reporter's notebook. She was, after all, introduced to me as a "secretary". I cannot recall if the right one was proffered for a handshake.

Never having had a secretary at any time in my previous professional career, at the Bank such were regarded as status symbols and in our computer centre with 1,200 staff, I think we had only four, I had no sense as to what her job might be.

The initial briefing on Ministerial duties started immediately. It was focused and short. And I soon left to undertake the political and Parliamentary engagements that were in my diary for the next four days.

At 18:00 on the Monday, after the completion of a surgery with constituents in Peterhead, I stepped into a Ministerial car for the first time and was transported south. I had chosen red as the colour of Ministerial engagements in my diary. It dominated that first week. And much more so thereafter. 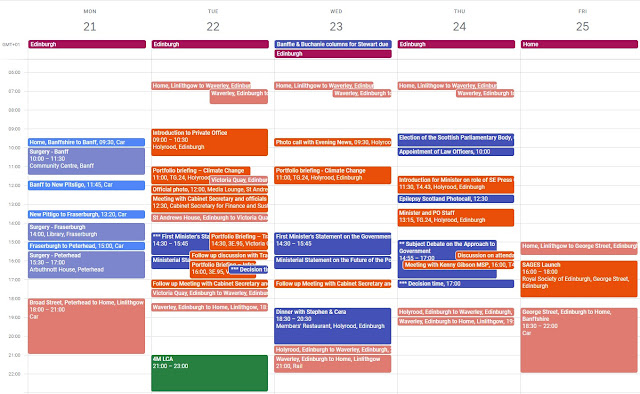 The first meeting of the week, my diary tells me, was "Introduction to Private Office". Although I wouldn't have summed up their job description in this way immediately after that meeting, I quickly realised that their role was to take away one's whole life and return only those parts of it which only a Minister could do.

My Private Secretary was capable of taking notes, writing letters and managing my diary. But I quickly twigged that this was the least of it. She was clever, well-informed, the holder of two degrees and somebody I had better get on with as I would be spending a huge amount of time with her.

My spouse describes her - they soon joined together to jointly exercise total control over my life - as my finishing school. Indeed if I had had even a bit of such assistance and support at the Bank, I could have been much more productive - good for my employer - and risen further in my career - good for me.

That first week saw the ever-energetic MSP, Kenny Gibson, be first up to meet me on a constituency issue. And my first public engagement.

I was officially launching an academic network called SAGES. The first potential pitfall of my Ministerial career beckoned.

I was sitting in the front row in the Royal Society of Edinburgh listening to the chair for the evening making introductory remarks prior to my taking over the podium. I was re-reading my speaking notes. Having someone write a speech for me was a totally novel experience. But despite the considerable preparation, what was in my hand did not seem to make sense to me. And then I twigged. The pages were in the wrong order. I had dropped them and failed to restore their proper order. And they were unnumbered. I quickly rearranged them.

The event went well. All future speeches had numbered pages, and that became an amendment to my "Ministerial Preferences". A part of my first meeting with my Private Office has been to establish what these were and to measure my speaking rate - 131 words per minute.

One of the early publications that came to me for sign off was a report that had been commissioned by my Ministerial predecessor. It was not well proofread and was full of typos and bad grammar. That cast some doubt in my mind about its content as well. The introduction would have my name on it so any faults in it would be my faults. I declined to sign it off and drew particular attention to the mis-spellings of my predecessor's name on a page with about seven typos on it.

Within the hour, a message reached me, accompanied by raised eyebrows on the part of my Private Secretary, to the effect that I could not not sign it off. It had gone to the printers. I still declined to sign off. I suggested that my predecessor would also not have been likely to have signed off something that misspelt his name.

It turned out of course that it had indeed gone to the printers, by email. No effort had yet been expended in actually putting it to print.

An early lesson to, read everything thoroughly, question everything about which it would be reasonable to ask a question, take no snaff (cf; snafu - situation normal, all fouled up, American army slang from 1941).

Another amendment was made to my Ministerial Preferences. Something like "the Minister is particular about grammar" now appeared there.

Some considerable time later, a journalist made a freedom of information request to see all the Ministerial Preferences. The overwhelming majority of such requests come from such sources. Not as the authors of the legislation seemed to have thought, from MOPs (Members of Public).

Gentle fun was then poked at me for being a grammarian.

I was pretty sure that my late father, particularly fussy about gerunds and gerundives, would have approved my adherence to proper standards.

And I didn't mind being so described.

The civil service did some things so much better than the Bank.