By zsstevens Monday, June 15, 2020
Were you to visit my office in Parliament, you would find no paper visible. And if you opened the drawers and the cupboards, very little would be then revealed. What there is, lies between the covers of books. From Tuesday to Thursday, there will be a pile of magazines waiting to be read. What's left unread goes for re-cycling at 1715 on Thursday as I depart for home.

Anything that arrives on paper and whose contents need to be preserved is scanned in and held in "the cloud". That is data storage out there in "internet land". Managed by a commercial company on my behalf. Actually, I am so paranoid that my data are held by multiple companies.

My fears about my data have been with me most of my life. When at primary school, I missed quite a lot of my time there because of illness, I used to have books full of codes. Not for any purpose related to my concealing the content of my writings. Rather, just because I enjoyed manipulating the symbols which are the letters of our alphabet.

I guarded the books with my codes with great care. And regret that somewhere along the road, I have mislaid this evidence of my juvenile endeavour.

Inevitable juvenescence took me to a new all-consuming hobby.

One of my father's close friends, a former desert rat in WW2 and by then a local lawyer, took my father to a bankruptcy sale in Perth. A Manufacturer of sailing dinghies was being wound up. Father returned home with a pram.

That's not something with four wheels, and in more elevated social circles beyond my parents' means, with a nanny attached as motive power. Rather it is (thanks Wikipedia), a small utility dinghy with a transom bow rather than a pointed bow. In short, the front end is blunt.

That started a long love affair with small boats. And led in relatively short order, to our moving from pottering about to racing. This pram came with sails, not wheels.

Once I became skipper of a dinghy, the intensity of my racing increased. In my peak year, I participated in about 400 races. And I maintained books describing each race. That had a genuine utility as should I return to a location, I could review my previous endeavours and their outcomes to inform my tactics.

Let's not overplay my skills. But I did manage to become Scottish Junior Single-Handed Champion at a competition on Forfar Loch. Not quite as impressive as it sounds as the total number of competitors was single figures. 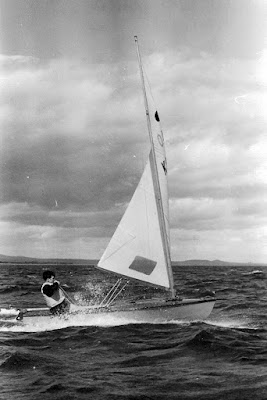 My career peaked in 1967 when after the first day's competition I was in the lead at the Scottish OK Championships. The "OK" was the type of dinghy I was now competing in. And as luck would have it, a camera from STV's Scotsport was present to film the event.

A highlight of my life. Arthur Montford, host of that program, you have to be my generation to remember how revered and mocked in equal proportion he was, wished me all the best for the next day—predictably demoting me to runner-up at the end.

The Champion was Lewis Bilton. His abilities were far beyond my reach and always had been. A series of flukes had promoted me beyond my normal achievement level on day 1.

In those days, Scotland's dinghy racers were not worthy of any comparison with those of other countries. The road to Shirley Robertson's Olympic Gold Medals in Sydney in 2000 and Athens in 2004 was a very long one. It was totally invisible in 1967.

What is today also totally unknown is the whereabouts of my dinghy racing records. I last saw them in our basement about the time of Ms Robertson's Australian success. I continue to hold out hope that I will find them at the bottom of a box in the garage. Unopened from one of our house moves. But probably not.

My first and most alarming encounter with data being mislaid or lost came in January 1971. It was not my data, but its loss could have been catastrophic for my programming colleagues and me.

I have previously written of my early days at Bank of Scotland as a newly engaged trainee computer programmer. I started in October 1969.

My recruitment was part of a quadrupling of the programming workforce at the Bank driven by Government plans to "decimalise" the currency. In May 1969 the Decimal Currency Act (https://www.legislation.gov.uk/ukpga/1969/19/contents) had been passed. The date for moving from Pounds, Shillings (20 in a pound), and Pence (12 in a shilling, 240 in a pound) to Pounds and (new) pence was "baked into" the Bill and was a mere twenty-one months ahead - 15th February 1971.

Although it did not form part of then Opposition leader Harold Wilson's "White Heat of Technology" speech to the Labour Party's conference on 1st October 1963 (http://nottspolitics.org/wp-content/uploads/2013/06/Labours-Plan-for-science.pdf), the move to decimalise the currency was, in my opinion, driven by the general sentiment enunciated in that speech.

For the Bank of Scotland, and for other less technologically advanced banks, the timetable was quite challenging. The Bank had acquired its first accounting machines in the 1950s and by the early 1960s was using proper computers. Hence there were quite a few computer programs needing converted. Thus I, and a cohort I remain part of to this day, were brought in, rapidly trained, and deployed on the conversion.

Two genius ideas assisted our efforts. Douglas S Robb was a highly gifted systems analyst who had caused many of our accounting systems to already process currency internally in a decimal-sterling form. There were "DSR" program segments (sub-routines if you wish) which were widely used in the Bank's programs. DSR cleverly was not just its progenitor's initials but also the name for our "Decimal/Sterling Routine" software.

We started our preparation for decimalisation slightly ahead because of his earlier decisions.

The other idea, I think this came from Jerry Gregson, was to embed into our programs both the process for manipulating the old £sd and new £p currencies that were to swap in 1971. And to have the programs automatically switch their processing mode when they detected the date had reached 15th February. There was another useful wee twist we'll pass by meantime.

That idea meant that as we worked our way through changing our programs, we could implement them in our standard day to day operation as soon as we were ready to. Any errors we had introduced could be dealt with at a measured pace well in advance of decimalisation day.

Banks shut at 1530 on 10th February and reopened at 1000 on the 15th. The intervening period was to allow banks, and others, to convert their systems. The big challenge was the need to print a "closing" bank statement for every account which showed the balance in £sd and then another which had an opening balance in £p.

There were one-off programs which converted the data in our files.

Other banks had the significant challenge of replacing all their computer programs in this five-day window. We didn't.

We completed the task, without any pain, on the Friday after only two day's processing. Other banks didn't quite make it in five.

So back to that data loss in January 1971 which nearly scuppered all our plans.

Overnight, operators in our computer centre mishandled a problem that arose in one of the disk drives on our mainframes. That damaged the majority of our disks and most of the drives that read data from them. While we hadn't lost essential data is was no longer easily accessible to us.

New equipment was sourced from around the world and we recovered in time, just.

But I have been left paranoid about data.

So I back up my data to three of my own computers in three locations. And hold that which really, really matters in two cloud services run by different companies.

All I now need is protection from very big sunspots which have the potential to "zap" every electronic device on the planet.

Any suggestions? Ah - back it up on paper. Good idea.

---------------
A mea culpa. Over the weekend, I had prepared for this week's Environment Committee meeting. Good. However, I had failed to notice that the meeting had moved from its usual slot, for this week only, from Tuesday morning to today (Monday). My diary said Tuesday.

So I was still proof-reading today's diary when Committee clerks contacted me, fortunately before the meeting started.

So the publication of today's diary is late. I have been in a three-hour meeting. Sorry!