By zsstevens Friday, June 26, 2020
Warning to the sensitive. There is some talk of blood today. Not human blood so..

Cats are omnipresent in our house. Even when physically absent, the great outdoors is a big pull for them; they remain in our minds.

Our two, Donald and Madelaine, have a truce with Mr Socks who lives next door. He regularly visits for a chat with them and sits on our right-hand gatepost. Ours sit on the other side and silently commune with him.

There are some disruptive influences. A red monster appears from time to time and, if spotted, is vigorously chased from her domain by Madelaine who is no more than half his size. But then that's the way she is.

Her most impressive defence has been against a local dog fox. She stood on the back step, every hair on full alert so that she looked twice her normal size, waving an armed paw only some two or three feet from his muzzle. Her mouth was open so that her full set of teeth were to be seen complementing a basso profundo growl accompanied by a serious hiss which propelled saliva towards him. I was glad to be behind her not facing such a massive display of aggression.

The fox concluded that he had urgent business elsewhere. And she lept purring onto my lap to receive congratulations and thanks.

But she cannot control everything although she tries. Last night I noticed that the visitors in our field had gifted her a present. At least, I assume that they were the source. A newly arrived tick had attached itself to the back of her neck. It's a reasonable surmise that it was newly arrived because it was not yet engorged with her blood.

It is possible that I am doing our neighbour Gordon whose sheep periodically arrive to cut the grass in our paddock, an injustice. There are other sources of ticks. But the timing is right, and Madelaine is a frequent visitor to that field.

By the time I have finished my daily jottings, I expect tick and cat will have started separate journeys. The infestor to oblivion. Herself back to the field to play double or quits.

For us, the next journey is to the shop. After over a week, even though I was down south for a couple of nights, our fresh supplies are near exhausted.

It's part of the slow edging towards a time beyond the worst stage of the ongoing pandemic that no longer are supermarkets scheduling special times for those of us deemed vulnerable. So we must take our chance with the hoi polloi. But that doesn't mean that we can't schedule our visit for what should be an off-peak period.

So we won't go when people are popping in before work; or after the day's toils. Lunchtime too is likely to see those who have to work away from home stocking up.

So we rose by 0600 in preparation for our shopping.

As ever, the boss has prepared two shopping lists. One simple one with easy-to-find items which profer little discretion in their selection. You guessed it; that's for me. Hers is for the more complex items which require refined and experienced judgement and a keen eye on price. Hers.

Before leaving the house; a full briefing of do's and even more critical, don'ts. I shall be up before the beak as usual later as my performance rarely reaches for 100% spousal satisfaction.

On today's list will be garlic bread which will provide the underpinnings for bruschetta to be consumed by me, accompanied by suitable liquid refreshment, during my fortnightly meeting with former colleagues from my pre-Parliamentary career. One clear advantage of social isolation is the opportunity to consume unlimited quantities of foods which you do not want to make your constituents aware of your having eaten.

A minor rule of politics, garlic on your breath loses you votes.

In a sense, it's good that my much missed late pal and former colleague Joe, will not be with us tonight. He spent many years attending classes in Italian. While it had a practical application during his wife and his many trips to Italy, it also was an important social activity in his retirement. Indeed in his last few days after a severe stroke, most of the words he spoke were Italian verbs. They were at the front of his very damaged brain.

He would have been driven to fury, as usual, at our hopeless attempts to pronounce "bruschetta". It was never very clear whether it was a faux distress designed to wind us all up or a deep-seated protectedness of his beloved Italian. Probably both.

But "brew-sh-etta" said anywhere within his hearing would lead to a deep growl followed by some Anglo-Saxon vocabulary. He would remind us that it is "bruce-ket-ta". It is lost without that hard "k".

Removing the former from my vocabulary tonight is the challenge. Replacing it with the latter a suitable homage to someone much missed.

I wrote yesterday about my having a new DNA match with one of my Parliamentary colleagues. A response to my email has confirmed that we are shown as being related as 5th to 8th cousins. Spotting and understanding this match is non-trivial. I have over 120 new matches this week alone.

In this case, knowing that we share DNA, 11 centiMorgans in a single DNA segment if you want to know, is just the start. It means we share an ancestor who was born anywhere from the mid-1500s up to about 1750. It may well be that that person is absent from any of the research we have undertaken to develop our respective trees. Narrowing the research down to people in our respective families who lived relatively close together is a strategy worth starting with. And for the dates covering the joining of our two trees together, there was much more limited migration than now.

I suspect another project for the summer. And will we be "coming out"? Depends on what scandals we discover en route to our goal. Their tree looks a bit more likely to be "clean" than mine.

Next week sees our SNP Group Convenor, Bruce Crawford stepping down. After our AGM on Monday. It's not an easy job; I know as I did it between 2003 and 2007 in simpler times and when there were far fewer us.

But I already know that the post will be filled by competent candidate who will keep us on track with similar good humour, team spirit and occasional sympathy that characterised Bruce's tenure. Thanks, Bruce. 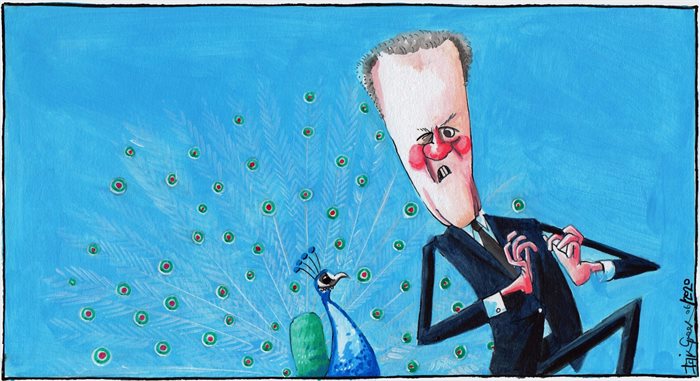 Finally, I have today added another cartoon of me to the collection. I knew that my mention of peacocks in Parliament would attract the attention of Liam Kirkcaldy of Holyrood Magazine. And it did (see https://www.holyrood.com/comment/view,sketch-stewart-stevenson-kidnaps-a-peacock_15681.htm).

Liam, as they nearly say in the "Hitchhiker's Guide to the Galaxy":

"So long and thanks for all the peacocks".

By zsstevens Friday, August 07, 2020
Today marks a significant step back out into the community. I shall be visiting Cairnbulg harbour to see the debris brought ashore from our seas. Some of my political colleagues in the community are getting seriously engaged in this issue and want me to see what's happening on their beaches. It's a good first outside engagement since March. Firstly because it is outside, it will be easy to maintain a two-metre distance, and there's no reason why I cannot wear a mask. And secondly because as we are a significantly coastal area, it is an issue that matters to us. One of the organisations that are engaged in the sea litter issue is KIMO. They describe themselves as a "network of local governments, working together for healthy seas, cleaner beaches, and thriving coastal communities." It was originally founded thirty years ago in Denmark. That's a country I feel a substantial affinity with, not least because my nephew works as a teacher there and has bi-ling
Post a Comment
Read more