Diagrams to inform and puzzle

By zsstevens Monday, June 08, 2020
Yesterday's "zoom" with my god-daughter and her mother was illuminating. Father was lurking somewhere off-camera undertaking some other activity. With parents holding four degrees between them and her being an only child, one might assume great progress on the home-schooling front.

The response to the question about how parents were doing as teachers, elicited a preference for father over mother. A strong defence of mother's maths teaching was immediately tabled. One could see a teenager in waiting in this eight-year-old's sideways look at mum. The difficulty must lie, in part, with how and when different parts of maths are now taught.

I could recall my digs mate Chris & I when we were students together in the 1960s being invited to assist our landlady's best pal's twelve-year son with his maths homework. It was on a bit of topology. The Collins English Dictionary defines this subject as:
One immediately thinks that "3." is a recursive definition. Come on; you've read the definition of recursion; "recursion: see recursion".

The two university maths students that we were more than 50 years ago had never studied topology. Indeed, we graduated without ever having done so. While a Year 1 secondary school pupil was tackling questions on it. The best help we could offer was to offer no help. Indeed we could have learned from the school pupil.

I elicited from Darcey that a recent piece of work involved the production of a "Collins Diagram". A familiar puzzlement swept over me. To be replaced by some comprehension when she returned with an example.

It seemed to be a cross between a set theory diagram and what I know as a Boston Box. Her efforts appeared to represent a piece of work involving analysis. And having tracked down the Collins website (yup, the same people as the dictionary publishers) which seeks to educate our schoolsters, I can now see that a "Collins Diagram" looks a bit advanced for my septuagenarian brain.

I went back to the library of my Powerpoint presentations, there are nearly 800 in it dating back to 1993, and found a Boston Box within a couple of minutes. Like all such diagrams, it is designed to illustrate a piece of information simply and memorably. And if it uses a familiar way of presenting it, Boston Boxes were all the rage then, so much the better. 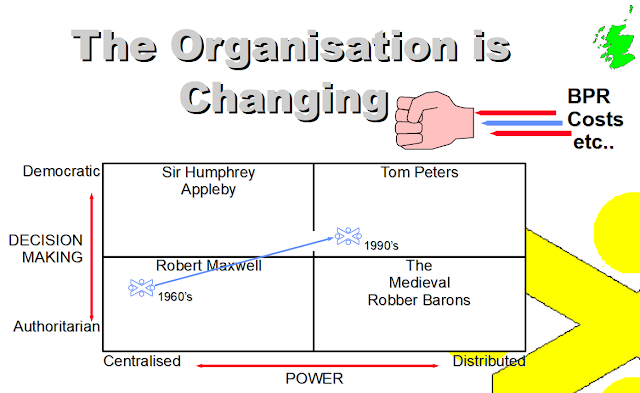 The one I attach here that should still be accessible to most modern readers. Albeit there are cultural references, to "Yes Prime Minister", an American business scientist who wrote a then novel book "In Search of Excellence", and Robert Maxwell, a crook. Hopefully the reference to "Medieval Robber Barons" requires no further explanation.

The difficulty with a Collins Diagram is not that I would fail to understand it if I were given a wee while to study one, it's just its unfamiliarity. I wonder how much the change in the sequence of learning and the updating of how ideas and outcomes are presented creates problems for "home teachers". And god-fathers.

But I have concluded that it really doesn't matter very much. I could just relax and listen. Darcey seemed to be in reasonable control of her topic. And I guess her teachers may reach the same view. She's more extrovert (yes you are, Darcey) and better educated than I was at that age.

I had more or less ignored the curriculum and randomly read any book that came to hand. Filled my brain with almost anything but that which would promote my academic progress.

One of the sections of the Scientific American website (https://www.scientificamerican.com/) is entitled "Mind".

When I was presented with a briefing as a Minister, I found I could quickly turn over the pages and lay it to one side. The numbers in it had stuck and I could recall them from memory ad-lib. This disconcerted civil servants.

Barry Gordon, a professor of neurology and cognitive science, wrote in Scientific American in 2013 that "most people's memory for visual material is much better and more detailed than our recall of most other kinds of material". So I am delighted to find diagrams are centre stage in the home-schooling program Darcey is following. Visual memory is being provoked.

Our Government too seems to understand the power of good graphic layout. The COVID-19 - Framework for Decision Making, "Scotland’s route map through and out of the crisis" is a good example.

Up front, it's clearly been recognised that almost all readers will be doing so online rather than from a printed copy. So although it is on a (virtual) A4 sheet of paper, it is presented as landscape (long side across the screen, the short side from top to bottom) rather than portrait. That, kind of, fits most of our screens.

But the ratios of up to across are quite variable in different domains. Why?

TV originally followed Walt Disney's use of 4:3 for his films. For every four inches wide, the picture was three inches high. It was in comparatively recent times it became 16:9 which is, sort of, 4:3 squared. That's most computer monitors. Although I have two side by side in front me so arguably, I am using 32:9. The cursor moves seamlessly from one side to the other.

The A4 sheet, which the Government document I referred to above is formatted for, is used almost everywhere except the USA. It is part of the metric system. The A0 sheet of paper which is the base of the system is one square metre in size.

Purists may wish to read this paragraph. Others may skip it. An A0 sheet is 841 mm wide and 1189 mm high which equates to 0.999949 square metres. That's because there is a rule that each side in the "A" system must be an exact number of millimetres. And this is as close as you can get to one square metre.

Every time you fold an "A" sheet in half, you move up an "A". Half an A4 sheet is an A5 sheet. And because the long side is always √2 (square root of two) times the short side, the ratio of the sides remains the same, very very nearly. We have to round to the nearest millimetre.

But the bottom line is that someone thought about a lot more than simply the words in the document. But also the diagrams, colours and legibility.

If Collins diagrams do the job for Darcey; so be it.

Even if us 8th.decaders come from an older diagrammatic tradition.