By zsstevens Tuesday, June 30, 2020
My spouse has just brought to my attention an interview conducted by Jon Snow on Channel 4 last night. Carefully probing two professors about the flare-up of the coronavirus in Leicester, he let science lead the discussion.

That picks up on my writings yesterday about the need for good quality, non-political advice closely available to political decision-makers.

Young Jon Snow, he's nearly a year younger than me, is a cool head in a crisis. When I've met him, I have been impressed by his listening skills, his ability to pick the necessary essence of what's been said by his interviewee and test it.

What struck me quite quickly was a coincidence of name. One the founders of modern epidemiology was John Snow. He was a physician who conducted a statistical analysis of cholera infection and linked it to a contaminated water supply. Famously the street water pump in Soho was disabled in 1854 and within three days cases dropped off.

A further pointer to water being the problem was that none of the workers in the local brewery caught cholera. They all were given beer by their employer. The process of using water to produce the beer involved boiling and thus killed the bug causing the disease.

But the bottom line was his use of data and statistical analysis. Just what we see used today in public health. The Victorian building of sewers and water supply networks flowed from this.

Legislation seems to have taken a wee while to catch up. Wikipedia's pages on the Broad Street outbreak does not point to any legislative action. My own quick search shows that the Public Health Act of 1875 addresses the root cause of mass cholera - contamination of water supplies - at section 7, "Sewage to be purified before being discharged into streams."

But John Snow's statistical analysis was the vital step in identifying how cholera spread. The actual cause, bacteria, was found by Louis Pasteur in 1861, three years after Snow's death at the early age of 45. The bottom lines were that statistical analyses were a vital public health tool. Then as now. And that drinking beer rather than water avoided infection. Ironic that he was a teetotaller.

Speaking of beer, one of the more disgraceful episodes in the present pandemic has been the behaviour of the boss of the Weatherspoon's pub chain, Tim Martin. He is reported in the Mirror as saying, "staff should 'go and work in Tesco instead" and the quote him further on his staff; "they won't receive a penny more than the hours they have already worked". (https://www.mirror.co.uk/money/wetherspoons-refuses-pay-entire-workforce-21744741).

The following day (25th March 2020) the Metro reported that "Tim Martin has told alcohol suppliers they will not get paid until pubs re-open when the coronavirus crisis ends." (https://metro.co.uk/2020/03/25/wetherspoons-now-refusing-pay-suppliers-coronavirus-crisis-ends-12455940/).

This led to one plucky small Glasgow company who previously supplied Wetherspoons, West Brewery (https://www.westbeer.com/), saying, "it would rather sweep the streets than do business with Martin". (https://www.dailyrecord.co.uk/news/scottish-news/scots-brewery-ditches-wetherspoons-after-21795493). 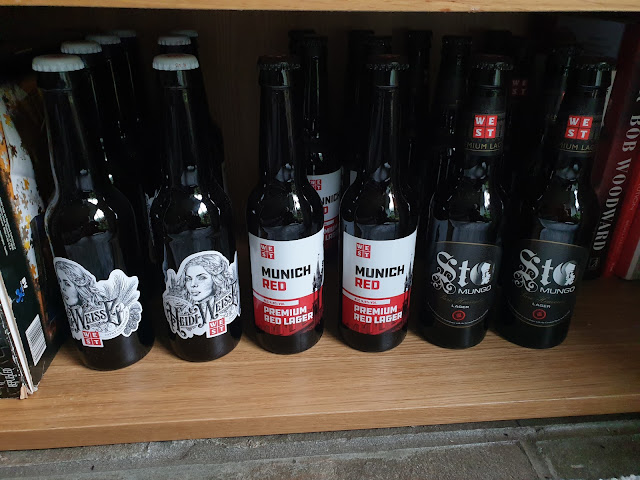 I immediately placed an order with West. It's long gone. But the virtue associated with consuming a product that saved people in a previous pandemic adds to my pleasure. Their bottles are quite small and beer being less alcoholic than wine, my booze intake has actually fallen. My second order sits handily a few feet away from my settee in the living room. Yummie!

It is a matter of particular sorrow that Martin operates what is now a bar in George Street, Edinburgh. I started my working career on 6th October 1969 in a room on the first floor of the building it occupies as did many of my former colleagues.

We have been rendezvousing at the bar there for our (previously) eight or so times a year we get together for dinner. Over the last twenty years or so, we have patronised many restaurants within walking distance which will grant us a discount. Employment at the Bank of Scotland taught us that you may only spend your money once. So spend it slowly.

After Martin's self-centred behaviour during this pandemic, I shall not be crossing the threshold of any business that might put money in his pocket. The Sunday Times rich list in 2018 suggested his net worth was £448 million. I suspect he will not notice my absence from his establishments. But after how he has treated his over forty thousand staff and many small suppliers, I simply cannot bring myself to return.

Mr Martin has, of course, not been shy of joining in political debate. Indeed, pages 7 to 11 in the 2019 company report from J D Wetherspoon PLC are devoted to such an engagement. I doubt he will be bothered by my making a political response, withdrawal of my custom, in response to his actions.

One of my colleagues in the North-East, Gillian Martin MSP, orchestrated a collage of our MSPs wearing face masks. A very timely reminder that each individual in society can make their contribution to the health of everyone.

We wear a mask, now a requirement on public transport, and advised whenever we are in the vicinity of other people, to protect others. It cuts our droplets, from speaking, breathing, anytime our mouth is open, from distribution to anyone nearby. By about 90%. Given that we are likely to only develop symptoms some days after we are infected, perhaps never, we can't imagine we are safe simply because we are well. The mask also reduces our risk of infection by a modest amount.

Some of my colleagues' masks are the epitome of good design. I refer of course to our First Minster's fine tartan design. Mine is firmly in the tradition of Coco Chanel's little black dress. Good design but a uniform black. Perfectly complements my silver mane which rises above it.

Yesterday we also had the AGM of the SNP Group in Parliament. Thanks to all demitting office and congratulations to Angela Constance as our new Convenor.