By zsstevens Thursday, June 11, 2020
This morning is one of those mornings where my personal emotions are somewhat conflicted. I successfully navigated being in two Committee meetings simultaneously. But today is also the first day after a valued member of staff has moved on to another job.

Yesterday I wrote about what was then a theoretical challenge which arose from my being on both the COVID-19 and Rural Parliamentary Committees which very largely overlapped in the Parliamentary timetable.

The primary challenge was that I knew that my upload bandwidth available from my narrowband (broadband?) connection at home would not sustain two simultaneous video-conference calls.

I have just checked right now - 07:12 hours which is well "off-peak" - the Ofcom speed checker shows a big red "X" against the measured speed supporting "Video Calling" as usual. I have been living dangerously and doing it anyway with almost total success despite the indicated upload speed being only 0.5 megabits per second. But two at once would be well beyond what would work.

The advice on working at home is clear. Work at home unless it is necessary to travel to do so.

I have previously written about my being unable to participate in votes taken in the Parliamentary Chamber. On the face of it, something that I could only do by travelling to my place of work. In practice, however, the parties have agreed reduced participation, really an update of the system of "pairing" that will be familiar to political geeks who follow the arcane processes used in the Westminster Parliament, which avoids my having to do so.

With the isolation rules on staying at home loosening millimetre by millimetre for a someone like myself, deemed "vulnerable" by reason of being over 70 years of age, and my being unable to work in two Committees from home, I faced a decision.

At my Edinburgh accommodation, my broadband connection is fibre-enabled and the upload speed - the one that matters most for video-conferencing - is nearly 19 megabits per second. That's approaching forty times the speed I have in rural Banffshire. Without doubt, capable of supporting two simultaneous video calls.

The test now was could I travel to my house down south without exposing myself to cross-infection from others? Or exposing the rest of the population to any virus I might unknowingly be carrying with me. My health remains good, arguably better than for some years due to my increased exercise, but with evidence emerging that there are a significant number of silent carriers (infected but not ill) of the COVID-19 virus, I could not discount being one of them.

But all the risks could be managed to a proper degree.

I could avoid public transport by travelling alone in my car. A refuelling stop would be advisable on one leg of the journey. Maintain social distancing while at the pump, wear a face mask when out of the car, and use a sanitiser after returning to it. In the event, there was only one other car at the pumps when I was there, and we were separated by a significant distance. Tick.

I took my own food with me for my time away to avoid shopping. A tin of vegetarian curry and a packet of porridge oats covered tea and breakfast.

My house down south has its own front door, so it's possible to arrive and depart safely. I saw one other family, parents and daughter, at about 50 metres distance when I departed. But otherwise no one. Tick.

The journey could be completed without a toilet break, and I carried a "just in case" empty plastic bottle. In remains unused. Tick.

Finally, there was the issue of the car failing en route. That issue seems now to be a vanishingly unlikely prospect since I sold my Land Rover Discovery, about eight years ago. No car bar the Disco, which despite being my only new car purchase in more than two decades, regularly suffered failures, has stranded me at the roadside since a fan-belt failure in my Triumph Dolomite Sprint in the 1970s.

[Side Note: The series 4 Discovery failures before its third birthday were (1) Regular overheating of the air suspension system causing it to shut down, (2) Two replacements of the control panel on the driver's door, (3) Failure to pull away after the automatic gearbox slipped out of gear due to rust on a bit of mechanical linkage to an electronic switch]

My second-hand Honda worked perfectly during my journies. As usual. Tick.

The issues in setting up my two computers were limited to two things. Getting the lighting right. Table lamps moved to be nearby, the overhead light supplemented by a standard lamp (sitting on the dining room table out of viewers' sight) finally worked. The audio which needed to supply the Rural Committee feed to my left ear, and the COVID-19 to my right was fiddly but ultimately effective.

The test would be if people watching, or reading the Official Report (not yet published), could discern my split attention and engagement. Looking at the videos this morning, I believe they would not know with one exception. Having just participated in a discussion about our 2-metre separation rule, the WHO recommends a minimum of 1 metre, in the COVID-19 Committee, I completed a segway to the Rural Committee within two minutes where I used my newly acquired knowledge to question public transport operators.

All in all, I felt pretty good about yesterday in my Committees. But it did require significant additional preparation, the creation of prospective timelines for my interventions in each, and a wee bit of luck.

I claim my concurrent Committee attendances as a world first. Or, at least, a first in our Parliament. Made possible by sensible availability of technology. 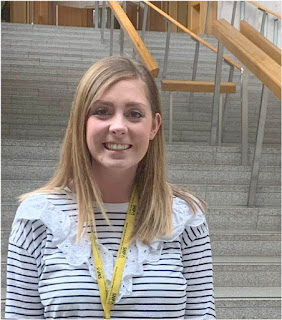 But there was also a little sadness in my day. Nicole has been working for Gillian Martin and me for about a year, providing maternity cover. Her role as our "press person" is an important one. There is little point in our doing good things in Edinburgh if no one knows about it. As the old saying goes, "you can't see a black cat in a coal cellar".

I have issued 143 press releases during her time with me, not all from her pen admittedly. She has written numerous articles. She has successfully placed me before cameras and journalists. And her networking skills elevated my knowledge of what is going on both inside the Holyrood "bubble", but more importantly, outwith it.

But above all, her confident smile greeted me each day I was in Parliament. And in her "spare" time she has been doing all the same things for Gillian.

Finding a good new job during lockdown cannot have been straightforward. But this relatively newly-minted graduate has secured a position with the National Union of Students which is a clear step forward in her career.

The staff you would most wish to keep are those you must plan to lose. Nicole is definitely one such. We were always going to lose her from her temporary post. But her time with us more than fulfilled my requirements. She has the potential to be a leader in whatever direction her career takes her.

As compensation, we shall shortly see Niamh return shortly. She found us Nicole so she's bound to be good. And she is.

Big shoes wait for Niamh to step back into.

She will do that very well.

By zsstevens Friday, August 07, 2020
Today marks a significant step back out into the community. I shall be visiting Cairnbulg harbour to see the debris brought ashore from our seas. Some of my political colleagues in the community are getting seriously engaged in this issue and want me to see what's happening on their beaches. It's a good first outside engagement since March. Firstly because it is outside, it will be easy to maintain a two-metre distance, and there's no reason why I cannot wear a mask. And secondly because as we are a significantly coastal area, it is an issue that matters to us. One of the organisations that are engaged in the sea litter issue is KIMO. They describe themselves as a "network of local governments, working together for healthy seas, cleaner beaches, and thriving coastal communities." It was originally founded thirty years ago in Denmark. That's a country I feel a substantial affinity with, not least because my nephew works as a teacher there and has bi-ling
Post a Comment
Read more