How to avoid being a celebrity

By zsstevens Saturday, June 27, 2020
Some things sneak up on you unobserved. I had previously thought that I would have stopped this daily diary after 100 editions. Just hadn't noticed that yesterday was that milestone.

Today has its own significance. The words written here will take the total over the 120 thousand mark.

So today marks diary day 101. George Orwell created the original Room 101 as the place that the enemies of Big Brother are consigned to. And the fearsome Big Brother has been transmogrified into a "reality" show on TV. Just like Room 101.

These are both programs I am unlikely to watch. A quick glance or two at Room 101 took no time to persuade me that I found it neither humorous, informative nor entertaining.

The whole genre of "reality" shows, from which it appears "celebrity" emerges is as far from entertainment as I could imagine.

But does it do any harm to society as a whole that TV broadcasts some programs for which I have zero affinity? Probably not. So far, nobody is compelling me to watch anything. I am familiar with the purpose of the red button on the remote control.

Nearly fifty years ago, we had big red buttons in the computer room.

Computers then were large. They required substantial air-conditioning and standby power. When I was responsible for computer operation at Bank of Scotland in the late 1980s, the two halls for our processors were 1,200 square metres each.

The standby power could deliver 6 megawatts and the array of car batteries that protected continuous operation between our mains electricity failing and the eight generators spinning up, a 20-second gap, weighed forty tons.

The air-con could extract 6 million BTUs (British Thermal Units) from the computer halls each hour. One BTU is the amount of heat to raise one pound of water by one degree Fahrenheit. To translate that into something meaningful, that's enough heat to change a fifteen-tonne block of ice into boiling water.

BTUs have long vanished. We now measure energy instead of heat. And our 6 million BTUs are now a bit over a billion Joules. Mr Joule, who was a brewer from Salford, discovered the relationship between heat and mechanical work in the 1840s. It took us a long time to catch up.

So back to the big red button.

The computer room, filled as it was by lots of energy (ibid), and the electricity that provided it, needed to be safe environment from the 55 or so people who worked on each shift. So liberally scattered around the room were "big red buttons" which, if pressed, shut off all power to the equipment there.

In the early days, when it took our computers some hours to complete a task which our domestic laptops would do in seconds today, the bumping into a red button could have quite serious consequences. A carelessly wheeled trolley was exactly the right height to nudge the button.

Indeed in a number of post-unscheduled-power-down reviews, the classic computer operator's phrase; "I was on my break at the time", was coined. Sometimes replaced by crossed arms with pointing fingers left and right to indicate "it wis'nae me".

Big red buttons moved to slightly recessed boxes to minimise accidental hits. And the TLA (three-letter acronym), BRB (big red button) as in, "did they BRB it?" was invented.

To this day almost every kitchen has a BRB to cut power to the cooker. It lives on. And a techie help-desk today may still offer the advice when all else seems to have failed, "have you tried powering it off and on?". I am told that their internal reports on their activities may still say, "Advice offered: BRB".

The big red button was not the only hazard in the early days of commercial computing.

Our first purpose-built computer centre was at 2 Robertson Avenue in Edinburgh. And across the road was Ferranti who at that time was developing a new on-board radar system for the next generation of RAF fighters. That involved their firing very focussed radio waves around their laboratory. 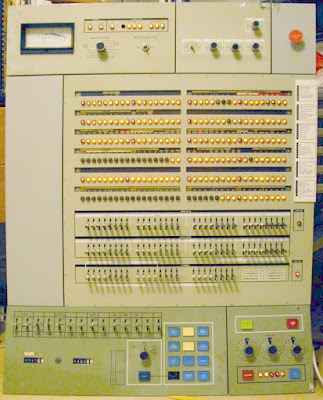 Some used to shoot over the road to reach our computers with rather unfortunate effects. The flashing lights on the panel, you could sometimes actually identify which program was running by the progression of the pattern of lights, would stop flashing and a red light at the bottom of the panel would come on. It meant, "Help! I have failed."

Our resident engineers spoke to Ferranti. Since they were working on a defence project, the Offical Secrets Acts applied. No information came back to us. So Heath Robinson to the rescue. (Wikipedia: temporary fixes using ingenuity and whatever is to hand, often string and tape, or unlikely cannibalisations).

A fence, between our computers and our neighbours across the road, constructed from kitchen foil and connected to a couple of car batteries created a barrier to their radar waves (the Faraday Cage effect). Normal service resumed. Just hope enemies did not use the same approach to block aircraft radar.

There used to be a lot of large cables connecting various bits of equipment together. That ran beneath a false floor where you could lift any tile to gain access. There was a big void, about half a metre deep, beneath the floor. Operators working weekends would often bring snacks into the computer hall. Food debris could make its way onto the void—even the occasional empty beer can.

This was a rodent food supply waiting to be exploited. And it was. Inevitably some took up residence and looked for nesting material. The insulation around cables does nicely thank you. Rodent teeth are sharp and sufficient to bring down our systems.

Being a bank's computer centre, one of our activities was processing cheques. The IBM 1419 cheque reader sorters could process 1,100 cheques a minute. In 1971 when I had to write my first piece of software to use them, we processed just over a million cheques a day. For reasons I won't bore you with, the cheques had to go through the machine several times. There was a lot of fast-moving paper.

Paper is an excellent carrier for static electricity. And when it moves, it can acquire quite high voltage electricity. (remember your school's Van de Graaff generator which could charge you up with 2 million volts? - "it's the volts what thrills, it's the amps what kills")

The operators of the 1419s did not work to three shifts and included a number of part-timers. In those less-enlightened days, when programmers and their managers were about 50-50 female-male, cheque reader operators were almost all female. Almost inevitably they would wander across to gossip with male operators who might be in physical contact with the computer's processing box.

These ladies had picked up many volts from the cheques and carried them across to be transferred, via a male operator, to the computer. Red lights again.

We had to forbid the wearing of any nylon clothing - perfect for carrying electricity - and buy our cheque reader operators cotton underwear.

Today's so much more powerful equipment which we carry around our homes and use in our offices is so incomparably immune to such quirks of electricity that modern users don't know how fragile these big old machines were.

But good that the BRB (big red button) lives on. Prominent on the TV commander.

Where would I be if I could not switch off some of the unmitigated rubbish plucked from the ether by our satellite dish?

Is it time for a day of calm contemplation once a year?

A day without telly. Let's consign it, but with the chance of a reprieve, to Room 101.